Yen May Extend Drop as Aussie Dollar Gains, But Not for Long

An ostensible downshift in trade war worries drove the move. That followed comments from US President Donald Trump talking up the possibility of a “great” trade deal with China, tamping down earlier fears of further tariff hikes.

Bellwether S&P 500 futures are pointing convincingly higher ahead of the opening bell on Wall Street, hinting that the risk-on drive has scope for follow-through. Critically though, a lasting recovery would require substantive resolution on a host of macro-level issues. That, alas, does not seem to be on offer.

A deal with China may well emerge eventually, but nothing suggests this is imminent. Further, headwinds from accelerating Fed rate hikes against a backdrop of slowing global growth and numerous pockets of political uncertainty – stalled Brexit talks and Italy’s tiff with the EU, for example – remain.

On balance, that suggests the markets’ readiness to emphatically embrace even the most trivial bit of encouragement reflects the extent of recent bloodletting and the accompanying need for a respite rather than a true improvement in the overall landscape. Such recoveries are brittle as a matter of course.

INCOMING DATA MAY BOLSTER THE CASE FOR EURO WEAKNESS

On the data front, Eurozone GDP statistics are expected to put regional growth at 1.8 percent on-year in the third quarter, the slowest in two years. Meanwhile, the German CPI report is projected to show inflation hit a seven-year high at 2.4 percent on-year in October.

Taken together, this speaks directly to the problem now faced by the ECB, explaining why the central bank’s rhetoric took a dovish turn last week (as expected). Namely, the recent rise in price growth is occurring for all the wrong reasons, reflecting a weaker currency rather than improved performance.

Further evidence to this end seems likely to bode ill for the Euro over time. Absent particularly eye-catching deviations from forecasts however, near-term volatility triggered in the releases’ wake seems unlikely to have staying power considering the ECB looks to be on autopilot at least through year-end. 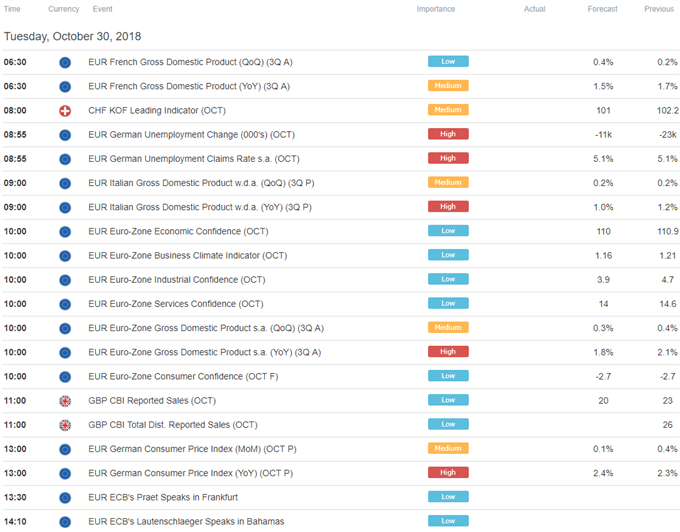