That seems unlikely. Participation dropped to a one-year low of 65.4 percent in September, suggesting that the lower jobless rate reflected an exodus from the labor force rather than a pickup in hiring. That seems hardly supportive and probably doesn’t speak to upward pressure on inflation that would be associated with tightening employment conditions. With that in mind, the Aussie’s uptick might prove to be fleeting.

The anti-risk Japanese Yen likewise rose as regional stocks followed Wall Street downward. The British Pound suffered amid worries that another Brexit deal pitch by UK Prime Minister Theresa May, this time at the EU leaders’ summit, has fizzledfruitlessly. Sideline reports hinted that she spoke only briefly and offered no substantively new proposals. The Canadian Dollar fell with crude oil prices.

YEN AIMS TO EXTEND GAINS, US DOLLAR MAY FOLLOW SUIT

Looking ahead, bellwether S&P 500 futures are pointing sharply lower, hinting that the risk-off mood is likely to prevail in the hours ahead. That seems likely to keep the Yen on offense. The US Dollar may also rise after minutes from September’s FOMC meeting poured cold water on hopes for a so-called “Powell put”, which seemed to derail its ability to capitalize on last week’s market rout.

While US central bank officials worried aloud about potential risks linked to leveraged loans and to a stronger currency, they nonetheless unanimously concluded that gradual policy tightening remains the best course of action. Some policymakers even suggested that rates may need to rise above their “long-run” level, implying that financial conditions may become more restrictive than markets have anticipated. 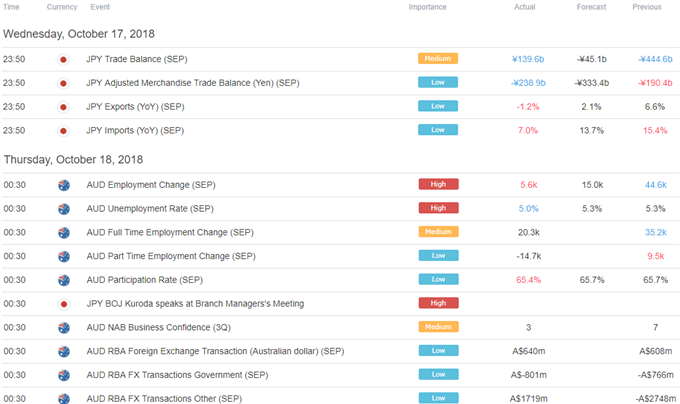