September’s PPI report is due today, with the core wholesale price growth rate expected to rebound to 2.5 percent on-year after sliding to a seven-month low of 2.3 percent in August. The higher-profile CPI gauge will follow Thursday and is expected to bring core inflation to 2.3 percent, up from 2.2 percent recorded in the prior month.

Leading PMI survey data reinforces the case for acceleration. Dramatically enough, it suggests that price growth in the service sector – by far the largest component of overall growth – rose to the highest in at least nine years last month. US economic releases have also tended to outperform baseline forecasts recently, bolstering the case for upside surprises.

Needless to say, such outcomes are likely to revive the hawkish drift in the markets’ Fed policy outlook. That would understandably bode well for the greenback. It may also trigger renewed risk aversion, boosting the Yen while commodity bloc currencies suffer outsized losses. To the extent that the PPI release sets the tone accordingly, it may mark move’s beginning. CPI is likely to generate the bulk of volatility however.

Meanwhile, the British Pound has its sights set on breakneck Brexit talks as officials from the EU and the UK race to secure the outlines of a divorce settlement before leaders of the regional bloc’s member states gather for a summit next week. Chief EU negotiator Michel Barnier is due to brief EU commissioners on the matter today, which may reveal critical details about what the final accord might look like.

Chatter from the sidelines of the negotiations has been generally positive. A deal is rumored to be possible as soon as Monday, with temporary UK membership in the EU customs union at the heart of a compromise. If Mr Barnier’s remarks reinforce the sense that tangible progress is being made, Sterling is likely to celebrate with broad-based gains. 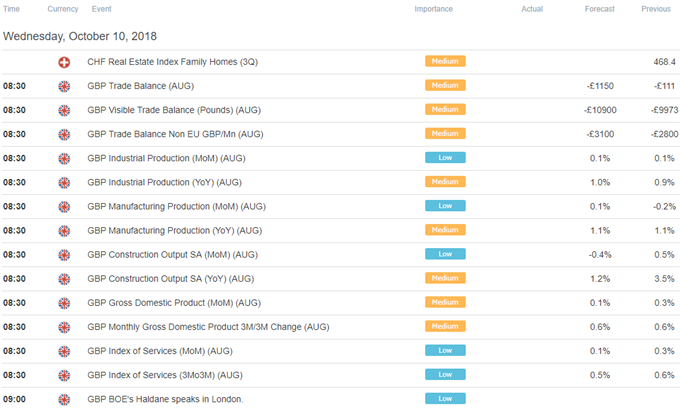