The Euro soared in Asia Pacific trade after Italy appeared to step back from imminent conflict with the EU. A Reuters report claimed that the anti-establishment government of populist M5S and nationalist League will now target a deficit to GDP ratio of 2.2 and 2.0 percent in 2020 and 2021 respectively, down from 2.4 percent next year. It previously envisioned a 2.4 percent shortfall through this entire three-year period.

The anti-risk Japanese Yen fell as the apparent breakthrough buoyed risk appetite. Interestingly, the usually pro-risk Australian and New Zealand Dollars also suffered as front-end US rates tellingly rose. That may reflect bets that reduced EU instability risk will give the Fed a freer hand to continue raising rates, boosting the yield appeal of the US Dollar relative to leading high-beta competitors.

POUND GAINS AS JOHNSON URGES TORY SUPPORT FOR PM MAY

The British Pound traded higher, marking a cautious rebound from yesterday’s downswing. That move seemed to reflect pre-positioning ahead of a much-anticipated speech from former Foreign Minister and leading Brexiteer Boris Johnson at the UK Conservative Party conference. He called for the Tories to rally around Prime Minister May, cooling speculation that he is gunning for her job (at least for now).

Investors have been unnerved by the prospect of a Conservative schism that would throw the government’s ability to negotiate with Brussels into disarray on the eve of a diplomatic marathon meant to thrash out a final deal on the UK/EU divorce settlement by the middle of next week. Mr Johnson’s somewhat conciliatory tone seems to give that effort a chance at success.

US DOLLAR MAY RISE ON SERVICES ISM DATA

Looking ahead, a quiet offering on the European calendar may put the US services ISM survey in the spotlight. The pace of sector activity growth is expected to have narrowly slowed in September. A recent upturn in US economic data outcomes relative to consensus forecasts opens the door for an upside surprise. That might help boost the priced-in 2019 Fed tightening outlook, lifting the greenback. 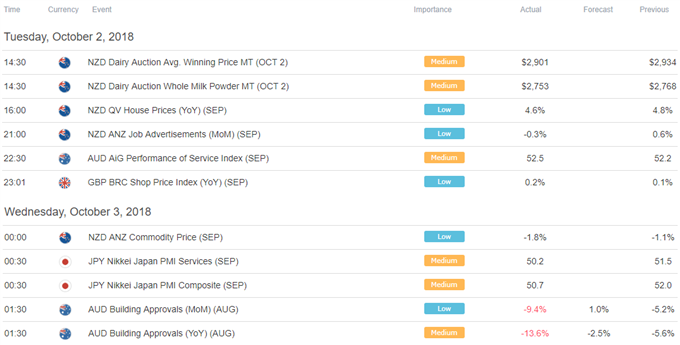 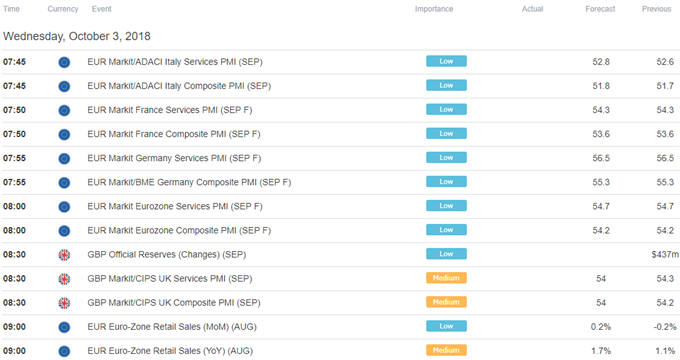