The Australian Dollar underperformed in Asia Pacific trade, sinking against all of its G10 FX counterparts. Three cabinet members quit the government of embattled Prime Minister Malcolm Turnbull, setting the stage for another leadership challenge. Investors unnerved by the attendant uncertainty divested of AUD-denominated assets, sending the currency toward the biggest one-day drop in two weeks.

Meanwhile, the US Dollar launched a spirited recovery. The rally played out parallel to a rise in Treasury bonds, hinting at returning risk aversion as the driving catalyst. The shaky situation in Canberra seemed to be amplified by Fed worries about trade wars and emerging market stress even as it continues to raise rates. Officials’ concerns were delivered by way of minutes from Augusts’ FOMC meeting.

Pre-positioning for Friday’s speech from Fed Chair Jerome Powell at the Economic Symposium in Jackson Hole, Wyoming might have compounded upward pressure on the greenback. Traders may have opted to trim short term anti-USD exposure, bracing for the possibility that hawkish rhetoric boosts the likelihood of a fourth rate hike this year. Markets now price the probability of such an outcome at 57.2 percent.

Eurozone PMI surveys are in focus on the European economic calendar. The regional composite measure is expected to show that the pace of manufacturing- and service-sector activity accelerated in August. Recent improvement in regional data outcomes relative to forecasts open the door for upside surprises, but that seems unlikely to offer lasting support to the Euro as ECB policy remains on autopilot in the near term. 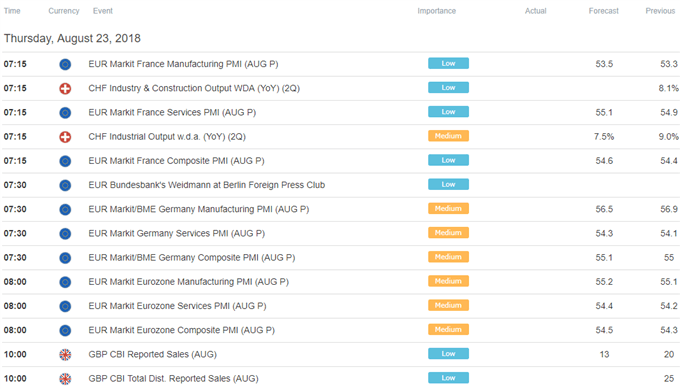