US Dollar and Yen Rise, Lira Falls as Turkey Hits US with Tariffs

Haven-seeking capital flows buoyed the US Dollar as risk appetite soured anew after yesterday’s tepid recovery in Asia Pacific trade. The perennially anti-risk Japanese Yen was not far behind while the sentiment-sensitive Australian and New Zealand Dollars suffered outsized losses.

Regional shares shed close to 1.3 percent on average, with a parallel drop in the Turkish Lira hinting that worries about its home country’s finances had resurfaced. US Treasury bonds rose in tandem, reinforcing the sense that risk aversion has returned.

Investors’ mood may have soured after Ankara raised tariffs on some US imports in a move that might escalate already acute tensions with Washington. Turkey’s Vice President Fuat Oktay said the move is “retaliation for...economic attacks by the United States”.

Futures tracking the S&P 500 equities benchmark are pointing notably lower ahead of the opening bell on Wall Street, hinting that the risk-off tone is likely to continue in the hours ahead. That hints USD and JPY may continue to track higher as commodity bloc FX bears the brunt of selling pressure.

UK CPI headlines the economic calendar in European trading hours. The on-year inflation rate is expected to tick up to 2.5 percent in July. The outcome may not offer much support to the British Pound however after the BOE signaled Brexit-related uncertainty will cap scope for rate hikes despite improving data.

Later in the day, markets may look past US retail sales figures, focusing on the TIC report instead. The former reading seems unlikely to meaningfully alter the Fed’s calculus one way or another. Meanwhile, the latter might signal that tightening prospects continue underpin demand for US assets. 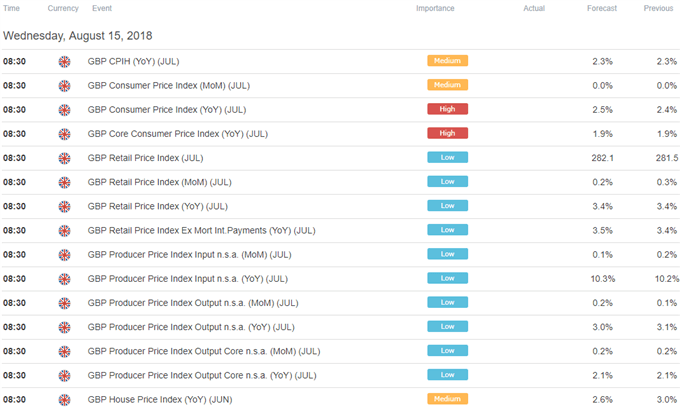