The anti-risk Yen also rose as automakers led Japanese stocks lower in Asia Pacific trade, spooked by the prospect of US auto tariffs as negotiators from the two countries meet for talks. While trade war fears have focused on China, a rift between Washington and Tokyo may emerge as another critical flashpoint.

The sit-down may follow a familiar playbook. Auto tariffs are deeply unpopular domestically, making them toxic before midterm elections and leading President Trump to bargain them away in talks with the EU’s Jean-Claude Junker (as expected). Modest concessions from Japan may yield the same result.

On balance, markets are likely to cheer such an outcome. To the extent that this boosts risk appetite, it seems likely to bode ill for the Yen and perhaps also for the similarly-minded Swiss Franc. Meanwhile, the US Dollar may rise on the back of demand for the go-to yield seeking play in the G10 FX space.

The Australian Dollar gained alongside Chinese stock prices. The currency is often traded as a proxy for developments in its home country’s top export market. The CSI 300 equities gauge was led higher by technology names in a move that echoed tech sector strength in the preceding Wall Street session.

In turn, that move followed impressive demand at a record-setting auction of $26 billion in 10-year Treasury notes. A healthy bid-to-cover ratio fueled hopes that the on-coming flood of new issuance to fund the yawning budget deficit may be absorbed without pushing borrowing costs higher too aggressively.

Not surprisingly, technology stocks cheered the prospect of a better funding environment than might have been feared. The sector’s fortunes are anchored to the availability of ample venture capital, which isunderstandably a function of the cost of credit.

The New Zealand Dollar underperformed in Asia Pacific trade, sinking after a dovish RBNZ policy announcement. The central bank said it is not planning to raise interest rates until sometime in 2020, clashing with market pricing that envisioned an increase in the fourth quarter of 2019. 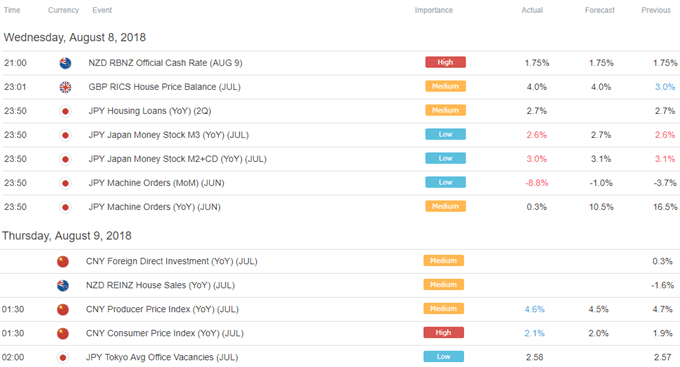