Mr Trump and Mr Kim signed what the US President called a “very comprehensive” agreement changing the bilateral relationship, though details on what it contains are absent for now. A breakthrough that cools tensions is likely to buoy risk appetite further, if only because there are economic benefits to reducing the threat of military confrontation between Pyongyang and US allies like South Korea and Japan.

In the final analysis, the role of China in brokering whatever rapprochement is on offer may prove most significant. If cooperation on North Korea helps build goodwill between the world’s top-two economies and downgrades trade-related tensions, at least one avenue for the spreading of trade war instability around the world will have been cut off (at least in the near term).

Later in the day, June’s German ZEW survey of analyst sentiment is unlikely to inspire a lasting response from the Euro as traders await the upcoming ECB monetary policy announcement before showing directional conviction. Similarly, May’s US CPI report may pass without US Dollar fireworks despite forecasts for a sharp inflationary pickup as markets look ahead to Wednesday’s FOMC rate decision.

The British Pound may see volatility as parliament votes on a provision keeping the UK within the EU customs union, a move directly in conflict with Prime Minister May’s negotiating position. Lawmakers will also take up a motion that, if passed, would give them the power to direct Brexit proceedings should the divorce deal that the government reaches with Brussels later this year be vetoed.

Needless to say, Ms May’s administration hopes to defeat both initiatives. Incoming headlines seem to suggest the Prime Minister has managed to unite Conservative MPs before the day’s proceedings. Still, it is unclear whether her triumph will buoy Sterling amid signs that the UK has rallied around a single standard-bearer or hurt it because a major effort to dilute Brexit will have unraveled. 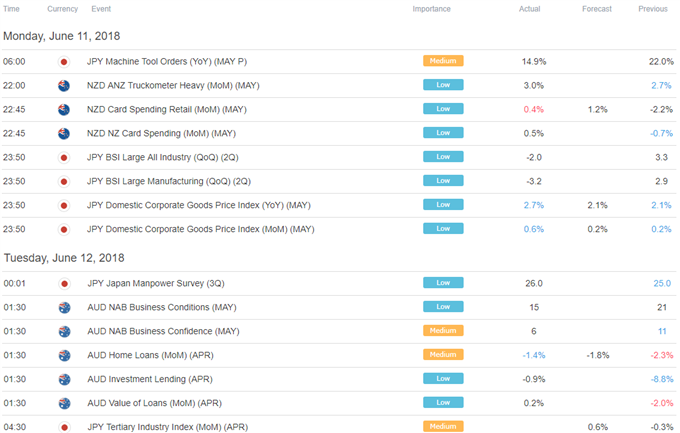