The British Pound declined as Scotland First Minister Nicola Sturgeon pledged to “restart” her campaign for secession from the UK. She is due to unveil a revamped economic policy framework this week, and hinted it would be an “important moment” in the move toward Scottish independence. That stoked speculation that Sturgeon will call for the use of Sterling to be discontinued in favor of a national, Scottish currency.

The Australian Dollar soared alongside stocks while the perennially anti-risk Japanese Yen declined as Asia Pacific markets began the trading week in a chipper mood. That seems to reflect the apparent cooling of commercial tensions between the US and China. The Trump administration tabled new tariffs in exchange for China’s pledge to “significantly increase purchases” of US-made goods.

The Canadian Dollar rose despite comments from Treasury Secretary Mnuchin saying NAFTA negotiators are still “far apart”. The move appears corrective after the currency’s laggard performance Friday. That followed soft inflation data and another warning about slow progress in NAFTA talks, this time from US Trade Representative Robert Lighthizer.

Looking ahead, an empty data docket in Europe and a lackluster one in the US will likely leave sentiment trends in control. FTSE 100 and S&P 500 futures are pointing convincingly higher, hinting at a risk-on bias that bodes ill for funding currencies such as the Yen and the Swiss Franc. On the other hand, the US Dollar may rise as the lone beneficiary of an overtly hawkish central bank in the G10 FX space. 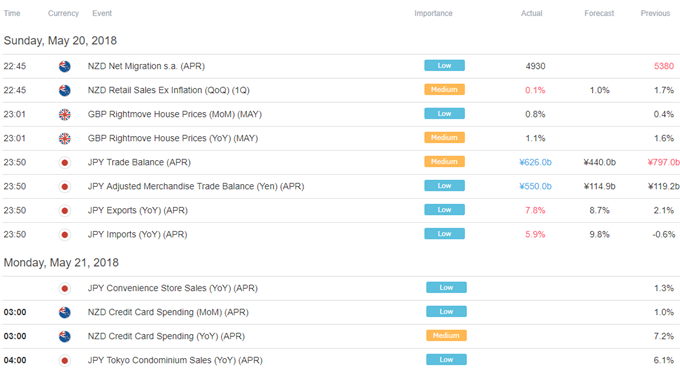