US Dollar, Market Sentiment at the Mercy of Fed Chair Powell

All eyes are on Federal Reserve Chair Jerome Powell as he speaks at a joint SNB/IMF event in Zurich. He will discuss the influence of monetary policy on global financial conditions.That seems all too appropriate at a time when Fed rate hikes are pushing up borrowing costs worldwide.

Requisite niceties aside, Mr Powell will have the chance to confront this reality head-on. If he does so in earnest, it seems difficult to imagine that he will do anything other than respectfully assert the primacy of US economic needs in the Fed’s thinking, implying that tightening will not be easily delayed.

In this scenario, the US Dollar may return to the offensive against its major counterparts. More broadly, recent price action suggests financial markets are far from sanguine about aggressive stimulus withdrawal. The anti-risk Yen and Swiss Franc may thus advance if Mr Powell’s remarks sour sentiment at large.

The Canadian Dollar fell with crude oil prices after President Donald Trump said a decision on continued US participation in a nuclear disarmament deal with Iran will be announced today. With the WTI benchmark already at a four-year high, that may have inspired profit-taking from short-term buyers. 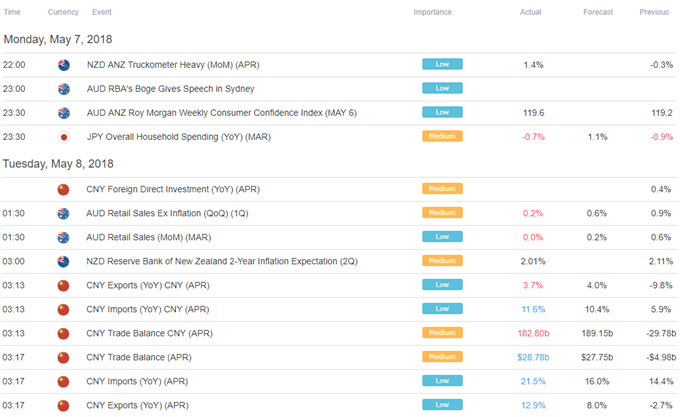