Will the ECB, BOE and SNB Inspire Another Surge in FX Volatility?

There is no shortage of event risk in European trade as a trio of policy announcements from the SNB, the BOE and ECB cross the wires. The Swiss monetary authority seems like the least eventful of the bunch, with officials likely to deliver a familiar rhetoric threatening to intervene if the Franc gets to strong but leave policy otherwise unchanged (although the possibility of a surprise shouldn’t be totally dismissed).

The BOE’s rate-setting MPC committee seems unlikely to change course from the cautious stance it took in the last quarterly Inflation Report (QIR) while Brexit uncertainly remains a concern. A slightly expansionary fiscal lean in the Autumn Budget might nudge up rate hike timing eventually, but the central bank will probably want to see the economy deviating from its forecasts before signaling as much.

As for the ECB, its policy path seems to be on auto-pilot in the near term after the Governing Council unveiled an overhaul of QE asset purchases in October. They were halved to €30 billion per month but extended through September. A watch-and-see period is now likely, although the press conference with President Mario Draghi after the meeting might shed some light on what levers may be used to alter policy going forward.

On balance, this means the BOE won’t inspire fireworks from the British Pound, with surprise risk tilted to the upside if minutes from the meeting reveal a larger hawkish MPCcontingent. The Euro response to the ECB may come down to economic forecastrevisions and Mr Draghi’s willingness to discuss QE exit strategies. Both seem unlikely because inflation has proven soft relative to forecasts since April.

The New Zealand Dollar corrected lower having led the way higher against its major counterparts in the prior day. The Japanese Yen – another big winner yesterday – likewise retraced downward.The Australian Dollar managed to overpower corrective flows, managing to outperform against the majors in Asia Pacific trade following an impressive set of local employment statistics.

Want to learn how to use economic news releases in your trading strategy? See our guide! 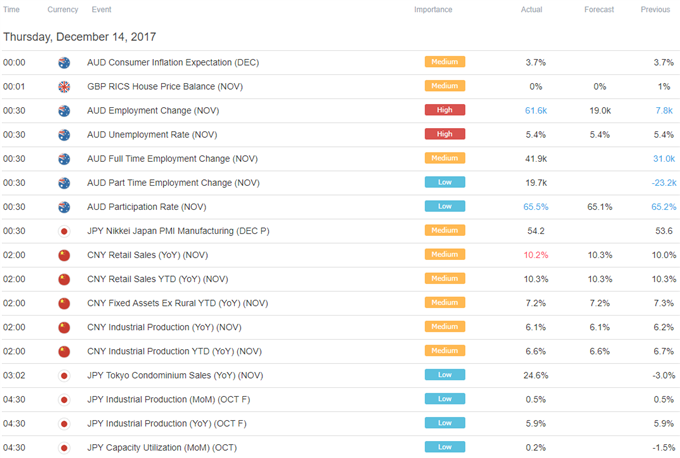 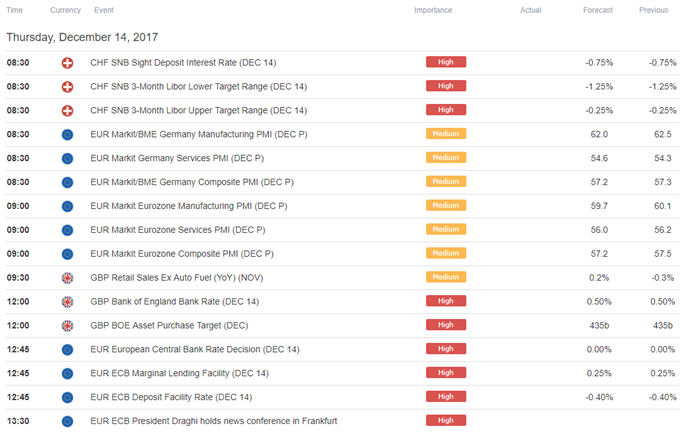