The US Dollar traded broadly lower in Asia Pacific trade. Markets were seemingly dialing back exposure to the greenback ahead of the upcoming Fed monetary policy announcement. Tellingly, rates-sensitive currencies at both extremes of the G10 FX yield spectrum – the Australian and New Zealand Dollars at the upper end and the Japanese Yen at the lower one – advanced in unison.

The rate-setting FOMC committee is widely expected to deliver another rate hike. Indeed, the priced-in probability of an increase as implied in Fed Funds futures is 99.3 percent. This means that the move itself is unlikely to merit a response from financial markets, putting the spotlight on the accompanying update of the 2018 tightening path and the post-meeting press conference with Chair Janet Yellen.

The markets are currently priced for two rate hikes next year, whereas the Fed’s last forecast update in September envisioned three of them. If policymakers decide to stick to their guns, a repricing in favor of the US currency will be in order. The move may be amplified if Chair Yellen signals that the central bank’s outlook isn’t contingent on inflationary fiscal policy in her post-announcement comments.

UK jobless claims statistics headline the economic calendar in European hours, but the results seem unlikely to make much of an impression on the British Pound. Indeed, the impact of yesterday’s CPI uptick was quick to fizzle as markets weighed the outcome against a BOE that is clearly averse to speedy stimulus withdrawal (as expected). More of the same seems likely this time around. 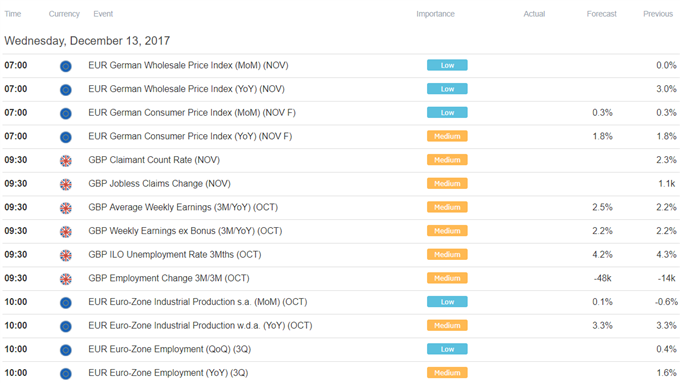