British Pound, US Dollar May Rise on Upbeat Manufacturing Data

The US Dollar traded broadly higher against its major counterparts in Asia Pacific trade as Fed rate hike speculation continued to build. The currency tellingly rose alongside front-end US Treasury bond yields while gold prices declined. The priced-in probability of a December rate hike implied in Fed Funds futures now stands at 70 percent, up from 63.2 percent a week ago.

The Euro underperformed in what looked like a somewhat belated response to weekend headlines coming out of Spain, where police clashed with Catalan voters trying to cast ballots in an independence referendum opposed by Madrid. The Yen likewise traded lower as upbeat Chinese PMI data published over the weekend cheered markets and weighed down the perennially anti-risk Japanese unit.

UK manufacturing PMI data headlines the data docket in European trading hours. The report is expected to show that the pace of factory-sector growth slowed for the first time in three months in September. UK economic news-flow has steadily improved relative to consensus forecasts since mid-August, opening the door for an upside surprise that may stoke BOE tightening bets and boost the British Pound.

The US’ analogous manufacturing ISM survey then enters the spotlight. Here too, analysts envision a slowdown but a string of outperforming data outcomes since June hints at the possibility of an upside surprise. That might accelerate the push to reprice the baseline Fed policy outlook for a steeper tightening trajectory, offering fresh fodder for US Dollar gains.

Where is the US Dollar heading the last three months of the year? Check out our forecast! 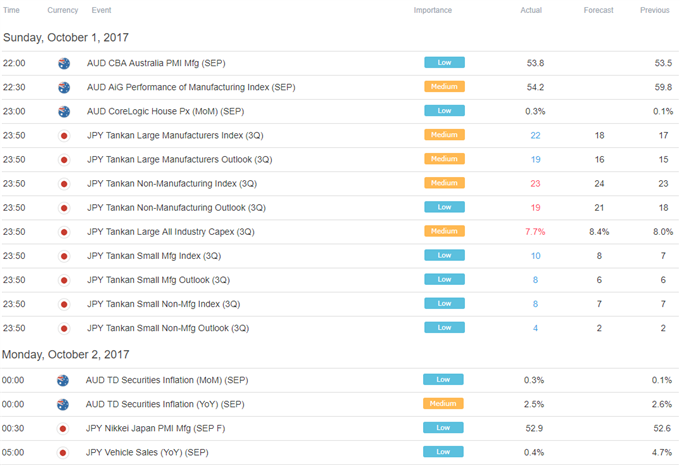