Euro May Pull Back on Soft German CPI, US Dollar at Risk on GDP

An early look at June’s German CPI data is expected to show that the headline year-on-year inflation rate fell to 1.4 percent, the lowest since December 2013. Leading survey data bolsters the case for a soft print. Markit Economics’ flash PMI figures pointed to the weakest price pressure in nearly half a year last week.

A weak CPI reading may add weight to ECB protestations at the markets’ hawkish reading of recent comments from Mario Draghi, the central bank’s president. He said the current policy setting may become comparatively more accommodative if growth trends continue to improve, warranting a countervailing adjustment.

The markets read this to mean that the ECB may be gearing up to taper QE asset purchases in the months ahead. Not surprisingly, this sent the Euro sharply higher. The central bank now claims the markets misunderstood Draghi’s remarks, saying he meant to deliver a “balanced” message.

With this in mind, another move away from the ECB’s target of near-2 percent inflation may be seen as demonstrating that the central bank is right to backtrack after the heretofore dovish Mr Draghi’s would-be change of heart. That may dim policy normalization hopes and punish the single currency.

Later in the day, the spotlight turns to a revised set of first-quarter US GDP figures. The annualized growth rate is expected to register at 1.2 percent, in line with prior estimates. Economic news-flow since those were published has mostly disappointed however, opening the door for a downgrade.

Such a result may hurt the US Dollar as the perceived likelihood of another 2017 rate hike continues to erode. Markets now put the probability of an increase before the year is out at slightly better than even. That suggests that there is room for portfolios to adjust to a more dovish baseline if a weaker reading emerges.

What do other traders’ Euro buy/sell decisions hint about the on-coming price trend? Find out here! 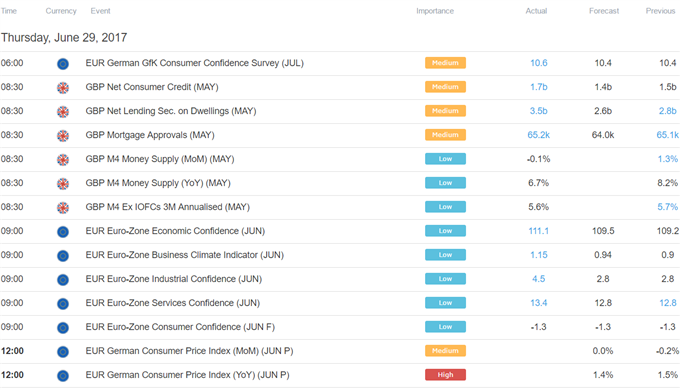