Euro and US Dollar Look Vulnerable as Inflation Slows

The Yen outperformed in Asian trade as regional stock exchanges traded lower, boosting demand for the perennially anti-risk currency. The US Dollar likewise traded higher. That move was accompanied by gains in benchmark 10-year Treasury bond prices – another baseline anti-risk instrument – suggesting the greenback may be reclaiming its haven appeal.

The Euro was weakest among the G10 FX majors, with prices seemingly still reeling from yesterday’s comments by ECB President Mario Draghi. The central bank chief struck a dovish tone in testimony before the European Parliament as expected, saying it is too early to expect a change in monetary policy because officials are “firmly convinced” that the economy needs further support.

May’s preliminary set of German CPI figures headlines the economic calendar in European trading hours. The benchmark year-on-year inflation rate is expected to fall to 1.6 percent from 2 percent in April. Euro-area economic news-flow has increasingly underwhelmed relative to consensus forecasts in recent weeks, opening the door for a still softer outcome, which may amplify pressure on the single currency.

The Fed’s favored PCE gauge of US inflation enters the spotlight later in the day. The core year-on-year rate is expected to tick down to 1.5 percent, the lowest since December 2015. A still softer outcome echoing mostly disappointing US data outcomes since mid-March may cool expectations for Fed rate hike prospects beyond June’s policy meeting, weighing on the US Dollar.

Need help turning your market outlook into an actionable strategy? Check out our trading guide! 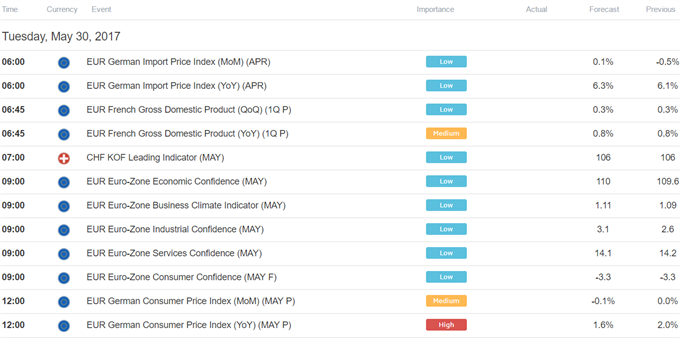