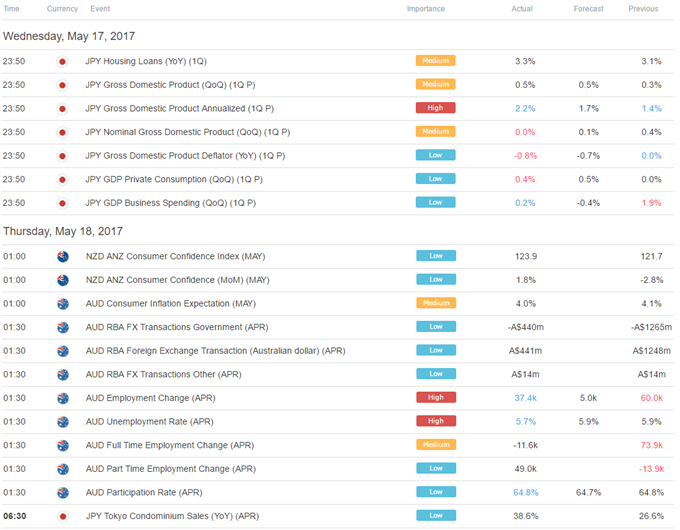 US Dollar Steadies After Brutal Selloff, May Bounce on Fed-Speak

The Australian Dollar outperformed in overnight trade, buoyed by upbeat employment figures. While the currency rose alongside local bond yields after the data crossed the wires – implying a shift in the hawkish direction along the expected rates policy spectrum – an actual hike remains a distant prospect. Priced-in bets suggest traders are all but certain that the RBA will sit on its hands through year-end.

The Canadian Dollar declined, falling alongside crude oil prices. The baseline WTI contract retraced some of its gains from the prior session having rallied after EIA inventory data showed US stockpiles shed 1.75 million barrels. While that was smaller than the 2.47 million barrel draw expected by investors, it was a far more supportive outcome than the leading API figures published in the prior session.

The US Dollar was also in digestion mode, correcting broadly higher after suffering the largest one-day loss in nearly 10 months against its major counterparts. The drop came amid deepening worries about US political instability that weighed on yields as capital flowed to the haven of Treasury bonds and flattened the projected 2017 rate hike path implied in Fed Funds futures.

From here, a lackluster offering of European and US economic data may keep sentiment trends in charge as the markets digest news-flow from Washington DC. S&P 500 futures are trading conspicuously flat however, suggesting a bit of consolidation may be in order unless another unexpected bombshell hits the wires. Needless to say, asset prices are particularly sensitive to stray headline risk at present.

A policy speech from Cleveland Fed President Loretta Mester may offer some much-needed perspective. The US central bank was aiming to pick up the pace of policy normalization before last year’s presidential election birthed the so-called “Trump trade” and probably intends to press on should the administration’s plans unravel (absent outright panic, of course). A reminder to that effect may help the greenback find footing.

What do retail traders’ US Dollar bets hint about the coming price trend? Find out here!