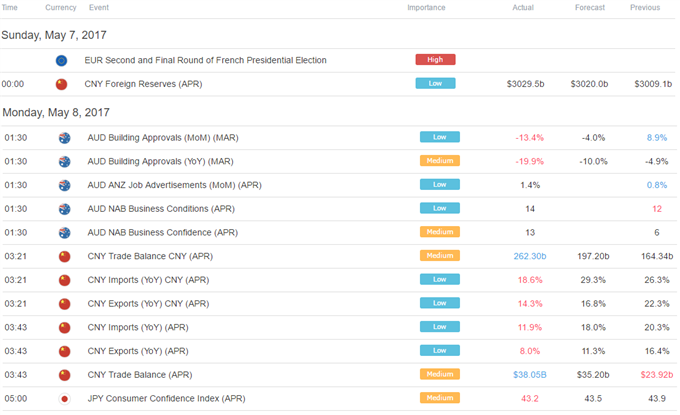 The Euro declined even as market favorite Emmanuel Macron emerged victorious in the second round of the French presidential election. As argued previously, the outcome was widely expected. With uncertainty about the vote now out of the way, the markets seemed to have reverted to underlying fundamentals. On this front, an ultra-dovish ECB and lingering Brexit-related risk remain potent reasons for weakness.

The New Zealand Dollar outperformed in otherwise quiet overnight trade. The currency rose alongside local front-end bond yields, which looks like an improvement in the monetary policy outlook at surface level. A clear-cut catalyst for a shift in traders’ expectations is absent however, hinting that the move reflects pre-positioning ahead of the upcoming RBNZ monetary policy announcement.

By contrast, the Australian Dollar fell after China reported that its foreign exchange reserves rose for a third consecutive month, and to a higher level than expected. This hints at tightening monetary conditions that may slow growth and undermine demand from Australia’s top export market. Local economic data seemed to help sellers build momentum. Chinese trade data passed with little fanfare.

From here, a tame offering of European and US economic data may be overlooked by financial markets. Comments from Cleveland and St. Louis Presidents Mester and Bullard may also pass by quietly since priced-in bets now see a June rate hike as nearly certain. That may put sentiment trends in focus, where weakening S&P 500 futures point to risk aversion. The Yen is most obviously likely to benefit in this scenario.

How will on-coming economic news impact markets? Join a webinar and follow along live!