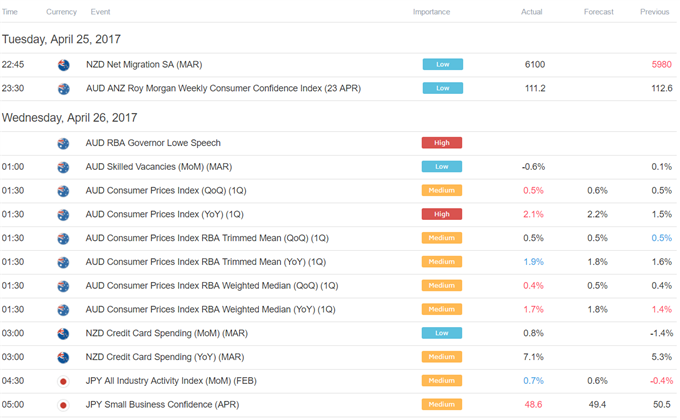 The markets interpreted the outcome of the first round of the French presidential election as neutralizing a potent risk aversion trigger and so removing a major threat to the Fed’s 2017 rate hike ambitions. Indeed, the priced-in tightening implied in Fed Funds futures is now at its steepest in three weeks.

The spotlight now turns to the announcement of a White House tax reform proposal. This is a pivotal component of the so-called “Trump trade”, a post-election narrative that foresaw fiscal stimulus including tax cuts and infrastructure spending stoking inflation and pushing the Fed to reduce accommodation faster.

Traders will closely scrutinize the plan for its pass-ability. Indeed, worries about the possibility that conservatives in the House of Representatives will scuttle any effort that grows the deficit have already emerged. Failure to at least acknowledge these concerns in the announcement may sour optimism.

The fate of the controversial border adjustment tax (BAT), a scheme meant to boost exports and penalize imports, may be another source of division between the administration and its own Republican party members in the legislature. The latter likes it; the former apparently less so.

The President’s aborted healthcare reform effort – the AHCA – raised doubts about his ability to turn campaign promises into policy but didn’t quite speak directly to the “Trump trade” hopeful. Needless to say, tax cuts are another matter. A proposal that looks like it too may fizzle will bode ill for the Fed outlook and USD.