UK CPI data headlines the economic calendar in European trading hours. The benchmark on-year inflation rate is expected to remain unchanged at 2.3 percent. UK economic news-flow has increasingly deteriorated relative to consensus forecasts over the past two months, opening the door for a downside surprise.

Such an outcome may be read as giving the Bank of England cover for its dovish impulses. Indeed, policymakers have painstakingly justified delaying rate hikes as price growth spiked after the Brexit referendum. Data bolstering their argument may push back tightening bets and weigh on the British Pound.

Germany’s ZEW survey of analyst sentiment is also due to cross the wires. An improvement in coincident and forward-looking confidence measures is expected. The outcome is unlikely to inspire lasting Euro follow-through however considering its limited implications for near-term ECB policy trends.

The on-going meeting of G7 foreign ministers is another important consideration. US Secretary of State Rex Tillerson took a tougher line on the conflict in Syria on the first day of the sit-down yesterday, stoking worries about rising tensions and weighing on the Fed rate hike bets, sending the US Dollar lower.

More off the same may be on offer. Tillerson is due to travel to Russia immediately thereafter, setting the stage for showdown. Indeed, Russian President Vladimir Putin has already announced he won’t meet with the US official in protest of last week’s US strike on a Syrian airbase.

What will drive FX market trends in the second quarter? See our forecast and find out! 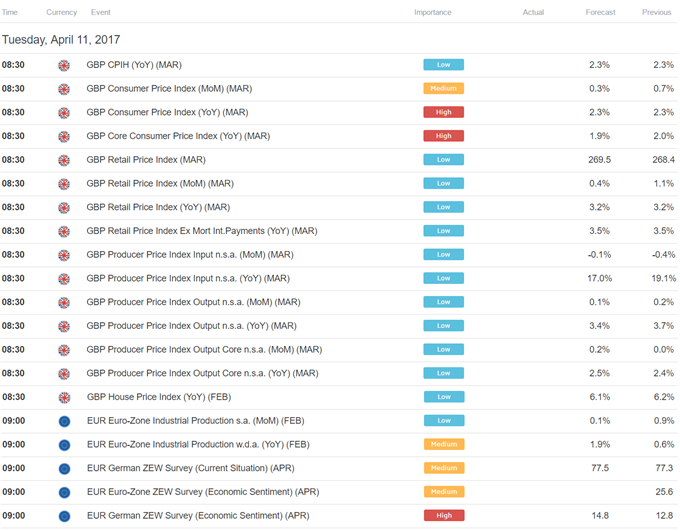