US Dollar May Rise If Trump, Xi Appear to Find Common Ground

Scheduled commentary from ECB President Mario Draghi headlines the economic calendar in European trading hours. The start of Brexit negotiations and a looming French election make for a treacherous landscape in the near term. That may inspire Draghi to push back against concerns that the ECB is running out of buy-able assets, stressing that stimulus can be expanded if needed and punishing the Euro in the process.

Later in the day, all eyes turn to a meeting between Donald Trump and Xi Jinping, the Presidents of the US and China. Bellicose rhetoric from the White House has traders worried that a rift between the world’s top two economies. Signs that the two leaders were able to find common ground may downgrade such fears and remove a perceived barrier to continued Fed rate hikes, sending the US Dollar upward.

The Japanese Yen outperformed as stocks fell in Asian trade, boosting demand for the standby anti-risk currency. The risk-off mood also weighed on the sentiment-sensitive Australian and New Zealand Dollars. A late-day rebound in S&P 500 index futures – which slid alongside Asian bourses early in the session – eased pressure on the latter currency. The Aussie continued to suffer however, stung by soft Chinese PMI data.

Have a question about trading the financial markets? Join a Q&A webinar and ask it live! 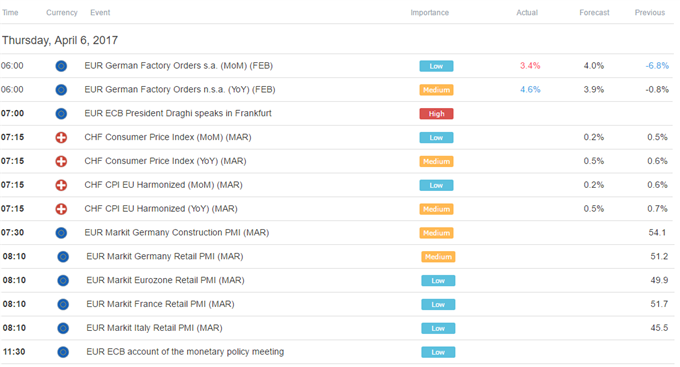