Risk aversion emerged across financial markets as Asian trade wound down and European bourses came online. Shares put in a mixed performance overnight and investors’ outlook seems to have deteriorated into the subsequent session, with most European equity benchmarks deeply under water.

Not surprisingly, the Japanese Yen emerged as a beneficiary as risk-off flows bolstered the perennially anti-risk currency. The typically sentiment-sensitive Australian Dollar dutifully bore the brunt of selling, with added pressure seemingly coming from data showing a steep drop in full-time employment in January.

The US Dollar was also on the defensive, extending a selloff that broke a four-day winning streak yesterday. Curiously, the greenback slumped even as projected Fed rate hike bets firmed following stronger-than-expected CPI data.

Curiously, the greenback fell alongside Treasury bond yields. While ebbing support from rates is a common-enough reason for currency weakness, it remains unclear why borrowing costs edged down in the first place. The priced-in tightening path steepened and stocks rose, which usually yields the opposite result.

Perhaps what transpired was profit-taking on short-term long USD exposure. With both days of Congressional testimony from Fed Chair Yellen as well as January’s inflation and retail sales numbers behind then, markets exhausted the week’s top-tier event risk. That is a mere theory however, and hardly provable.

The start of a two-day meeting of G20 foreign ministers in Germany may have made traders more jittery and so more eager to limit exposure than usual. The sit-down will be a coming-out affair for the Trump administration and markets may be understandably on edge.

Comments from Fed Vice Chair Stanley Fischer and San Francisco branch President John Williams take top billing from here. A chorus of hawkish comments from a trio of policymakers including Yellen failed to head off US Dollar sellers yesterday however. More of the same may also be ignored.

On the sentiment front, S&P 500 futures are pointing meaningfully lower ahead of the opening bell on Wall Street. While the fate of the US unit is clouded, this at least gives some indication that overnight Yen and Aussie Dollar moves have scope for follow-through.

Have a trading question? Join a Q&A webinar and ask it live! 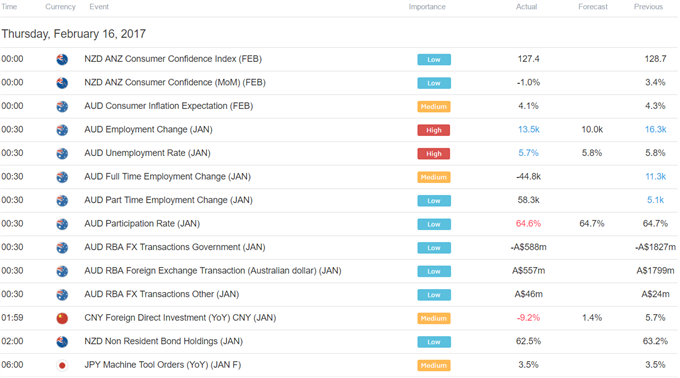