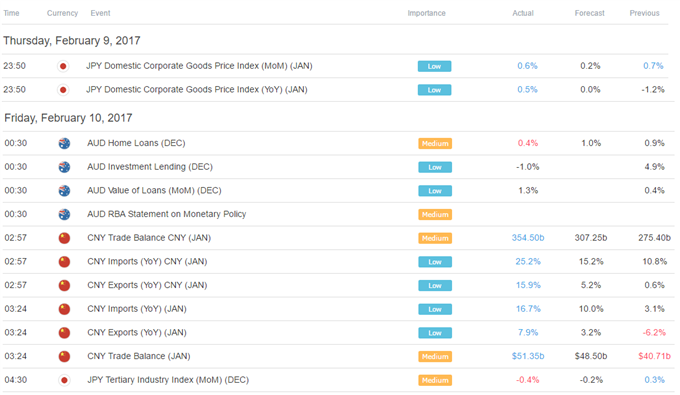 US Dollar Rebound, Yen Selloff May Continue on US Tax Cut Hopes

The Japanese Yen underperformed in overnight trade, sliding against all of its top currency counterparts as stocks roared higher across Asian bourses and undercut demand for the standby anti-risk currency. Investors’ mood turned rosy after the White House hinted at a big-splash tax reform plan in the works.

This reinvigorated the so-called “Trump trade” as hopes for a cut in corporate rates – a staple promise during last year’s presidential campaign cycle – rekindled bets for a pickup in both growth and inflation. Not surprisingly, this saw the US Dollar, Treasury bond yields and the S&P 500 rise in tandem.

The risk-on mood likewise translated into gains for the sentiment-geared Australian and Canadian Dollars. The New Zealand Dollar lagged behind its commodity-bloc brethren, seemingly still weighed down by this week’s dovish RBNZ policy announcement.

European and US stock index futures are pointing meaningfully higher as Asian trade winds down, hinting that yesterday’s dynamics are poised to carry forward. Absent another curveball from Washington, this bodes best for the greenback as the Yen continues to be the laggard in the G10 FX space.

The University of Michigan is expected to say US consumer confidence fell for the first in four months but deaf ears in the current atmosphere. Indeed, a cautious turn in Fed rhetoric hardly registered on investors’ radar yesterday, with the projected rate hike path steepening on the promise of fiscal stimulus.

What do traders’ buy/sell decisions hint about the on-coming US Dollar trend? Find out here!