All eyes are on January’s US employment figures into the end of the trading week. A broadly on-trend gain of 180k jobs is expected. US economic news-flow has tended to outperform relative to consensus forecasts recently, opening the door for a more upbeat result. Absent a blowout however, even a rosy print will not do much to allay the markets’ fiscal policy uncertainty fears or – for that matter – those of the Fed.

With that in mind, supportive payrolls numbers may be just enough to maintain the uneasy status quo and translate into an ultimately muted response from investors (kneejerk volatility aside, of course). A downside surprise may be far more market-moving however, pointing to an economy that is not quite primed for an aggressive rate hike cycle and sending the US Dollar downward.

The Japanese Yen underperformed in Asian trade after a show of force by the Bank of Japan seemingly designed to demonstrate its commitment to accommodative monetary policy. The central bank unexpectedly announced that it would buy an unlimited amount of 5-10 year government bonds (JGBs) at fixed rates (0.11 percent for the longer end) in the secondary market.

The BOJ seemed to be spurred into action after a regularly scheduled purchase of ¥450 billion of the same paper failed to impress investors and yields went up, boosting the currency. The rate on the 10-year note went up to 0.15 percent, above the perceived +/- 0.1 percent deviation threshold around the 0 percent target and the highest since the BOJ pushed benchmark borrowing costs into negative territory.

The Australian and New Zealand Dollars declined as Chinese stock markets slumped in their first session back from the Lunar New Year holiday. Bourses in Hong Kong and on the mainland had been shuttered for a week so there was plenty of room for catch-up selling to reflect the latest skepticism in the so-called “Trump trade”. An unexpected rate hike from Beijing probably didn’t help either.

Want to follow the release of US jobs data and get real-time commentary! Join the webinar ! 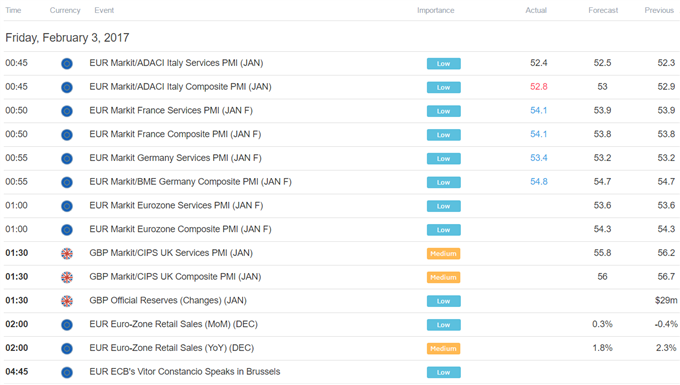