Japanese Yen May Return to the Offensive on Skittish FOMC

The New Zealand Dollar underperformed in overnight trade, sinking after a disappointing jobs report. The currency fell alongside local front-end bond yields, hinting that the data undermined RBNZ rate hike expectations. The markets’ priced-in outlook still envisions at least one increase in the next 12 months.

The Japanese Yen likewise traded lower as Asian stocks recovered after yesterday’s selloff, undermining support for the standby anti-risk unit. The US Dollar corrected gently higher as prices digested a drop to the lowest level in nearly two months in the prior session.

Looking ahead, the UK manufacturing PMI survey headlines an otherwise tame European data docket. A slight slowdown in the pace of factory-sector activity growth is expected. Whatever the outcome, it seems unlikely to offer a strong lead to the British Pound as the BOE “Super Thursday” looms ahead.

The looming FOMC rate decision may also undermine follow-through in European hours, with traders leery of committing to a firm directional bias until the announcement has crossed the wires. A broadly stable macro landscape argues for a status-quo statement echoing the cautiously hawkish stance seen in December.

If this bears out, it may be just enough to keep the US Dollar afloat amid the unwinding of the so-called “Trump trade”. The rate hike path is – by Fed officials’ own admission – intimately dependent on the impact of a still-vague fiscal policy pivot and any pronouncements now may prove stale rather quickly.

On the other hand, a more cautious tone inspired by the markets’ shakier performance since the beginning of the year may feed into investors’ worries. That might prove detrimental for the greenback and risk-geared assets alike, with the Yen emerging as the most obvious beneficiary in the G10 FX space.

Join DailyFX analysts to discuss the markets LIVE – sign up for a webinar ! 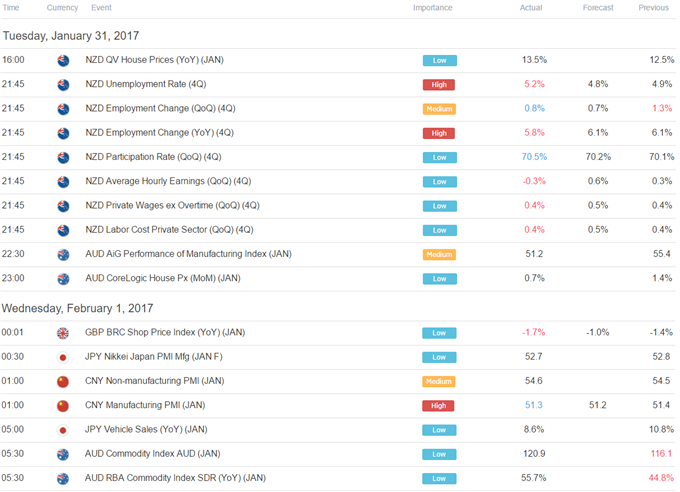