The UK Supreme Court decision on the degree of Parliament’s involvement in formally triggering Brexit is in focus in European trading hours. Prime Minister Theresa May has already said that she will seek votes from both houses of the legislature before moving forward.

Still, the judiciary can significantly complicate matters, prolonging the process well beyond Mrs May’s desire to invoke Article 50 of the Lisbon Treaty by the end of March. That would increase overall uncertainty surrounding EU/UK divorce proceedings, which may weigh on the British Pound.

In fact, the UK unit was already on the defensive ahead of the Court’s ruling, underperforming against its major counterparts in otherwise quiet overnight trade. Price action was otherwise muted across the G10 FX space as traders digested yesterday’s volatility.

The preliminary set of January’s Eurozone PMI figures is likewise on tap. The region-wide Composite measure is expected to show that the pace of manufacturing- and service-sector growth has accelerated for the fourth consecutive month, making the strongest performance in over five years.

Euro-area economic news-flow has noticeably improved relative to consensus forecasts over recent months, bolstering the case for an upbeat outcome. Such a result seems unlikely to alter the path of near-term ECB monetary policy and so ought to have limited implications for the Euro however.

Have questions about trading the markets? Join a Q&A webinar and ask them live! 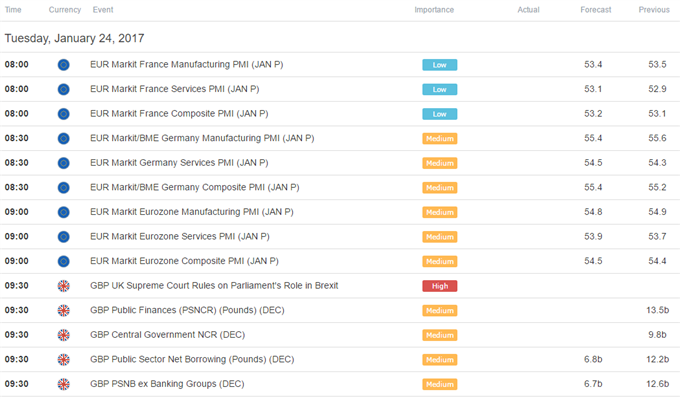