The US Dollar faced broad-based selling pressure as liquidity began to return after yesterday’s closure for the Martin Luther King Jr Day holiday. The greenback fell alongside US Treasury bond yields while gold prices rallied, suggesting the unwinding of the “Trump trade” – a dominant market theme since the start of 2017 – may be back in play. This narrative faded from view yesterday, yielding the spotlight to “hard Brexit” fears and offering the US currency a lifeline as a haven amid risk aversion.

UK-born jitters may yet resurface as all eyes turn to a much-anticipated speech form Prime Minister Theresa May, which is being billed as her most significant policy statement yet on the exit from the EU. If she strikes a somewhat conciliatory tone – saying that while the government is prepared to leave the single market, this is not an explicit objective – sentiment may firm. This ought to spur on overnight moves.

Establishing “hard Brexit” as a goal may revive yesterday’s risk-off mood however. In this scenario, the US unit may reclaim some lost ground while the Japanese Yen extends an already impressive rally. Asian stocks declined, boosting the standby anti-risk unit. Besides the obvious casualty of the British Pound, the overtly sentiment-linked Australian and New Zealand Dollars may suffer outsized losses.

December’s UK CPI data ought to pass with little fanfare. The headline year-on-year inflation rate is expected to rise to 1.4 percent, the highest since August 2014. Yesterday’s comments from BOE Governor Mark Carney reinforced the sense that the central bank is far from set on whether it will decide its policy dilemma in favor of income or price growth. This means that today’s figures probably mean little for the near-term rates outlook. Furthermore, traders will almost certainly wait for Mrs May to speak before showing commitment.

Have questions? Join a Q&A webinar and ask them live! 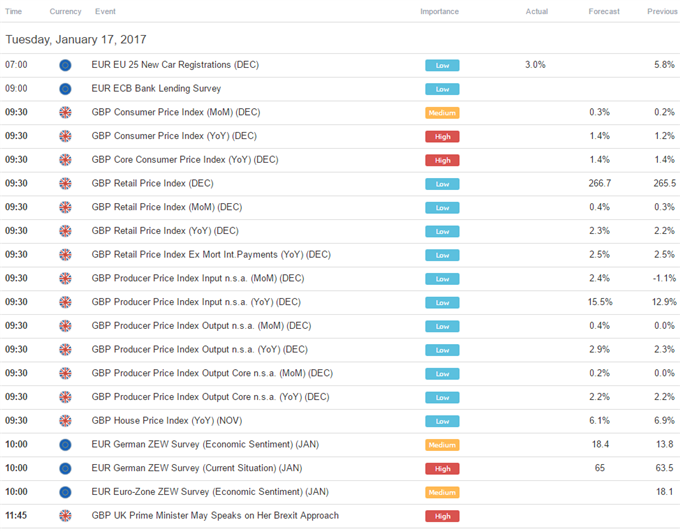