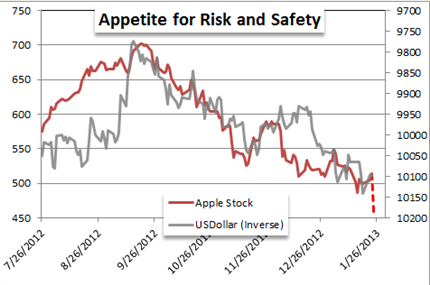 THE TAKEAWAY: Apple Q4 earnings disappointment a potential catalyst for risk adversion turn in the market > Risk aversion may lead to greater investment in safe currencies, such as USD and Yen > Budget Ceiling vote may bolster risk seeking in short term, but major reasons for reversion remain

Apple’s Q4 earnings report released on Wednesday sent Apple stock plummeting during after hours, followed by S&P futures, potentially igniting a state of risk aversion among equity investors. As of recently investors have been more risk seeking, highlighted by the growth in equities and heavy allocations towards high-yield currencies, like the AUD and NZD. As a significant component of the S&P 500, Apple’s negative earnings report may lead to sustainable fears regarding the overall equities market, causing participants to move towards more-safe haven investments, such as Treasuries and lower interest bearing currencies like the USD and the Yen. If this proves true, those investors holding safer investments should see gains against their risk seeking counterparts. Those currencies pairs which could see movement as a result of such risk aversion are the AUD/USD, NZD/USD, and AUD/JPY.

While Apple’s report put a damper on a relatively successful earnings season, Wednesday’s budget ceiling vote by the House of Representatives was a welcomed sign to equity investors. This vote should help to alleviate some of the market’s systematic fears, thereby promoting the continuation of risk seeking behavior of investors. However, this relief may be short sighted, as debt ceiling legislation has yet to be approved by the Senate and potential budget cuts continue to hang over economic progress. With so much uncertainty, safe haven investments, such as those mentioned above, may grow in demand with the markets overall sense of risk aversion. 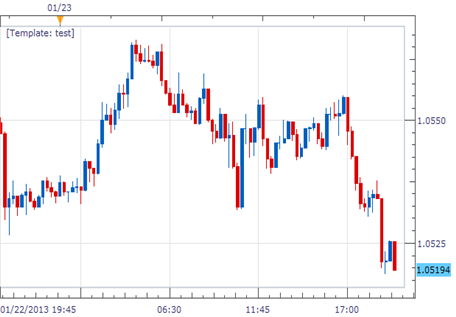