• A Gauge of UK Home Prices Fell to the Lowest Level in 11 Months
• The New Zealand Dollar Rises on Higher Rate Expectations
• Japan Industrial Production Rose 0.1% Month-Over-Month in May

The Euro gained 0.1 percent in overnight trade, moving back above the 1.26 level against the US Dollar. The move was largely technical in nature. Earlier in the US session, EURUSD managed to hold onto support near 1.2550, which spurred a bit of technical buying. On the fundamental front, The Pacific Investment Management Company (PIMCO), manager of the world’s largest bond fund, said that it has been reducing exposure to European debt and increasing exposure to US Treasuries. The New Zealand Dollar rose 0.24 percent, making it the top performing currency against the US dollar in the Asia session. The Kiwi is benefitting from rate hike expectations; overnight index swaps suggest that the Reserve Bank of New Zealand (RBNZ) will raise the benchmark overnight interest rate by 130 basis points over the next twelve months, up from 118 basis points a week ago.

New Zealand Food Prices increased 1.3% month-over-month in June, after falling 0.7% in May. Higher prices are a benefit to the Kiwi as they reinforce the expectations for aggressive rate hikes by the RBNZ.

According to the British Retail Consortium June Retail Sales Monitor, UK retail sales rose 1.2% from the year ago level. Sales were “helped by the heatwave in the second half of the month,” per the BRC. Another piece of UK data, the RICS Housing Market Survey Price Balance, a gauge of house prices, fell to the lowest level in 11 months.

Japan Industrial Production rose 0.1% month-over-month in May according to final figures released by the government. That is an improvement from the prior -0.1% reading. 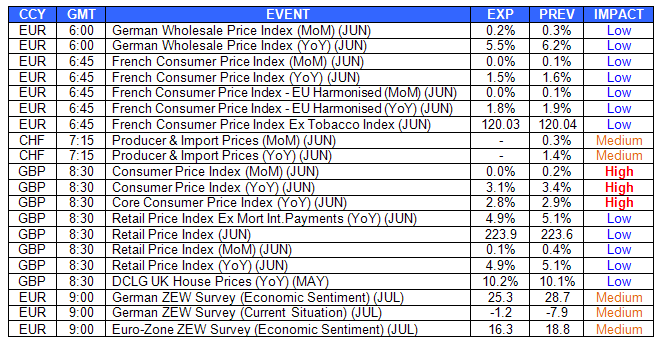 The European economic calendar is loaded with data on inflation. In particular, the UK Consumer Price Index for June looks to be the most important piece of economic data in the European session, with expectations for a decline in both the headline and core rates. Headline CPI is expected to show no increase month-over-month, which is down from the 0.2% rise in the prior month. While some central banks would be disappointed by such a reading, fearing deflation, the Bank of England will probably be relieved by a low reading, as UK inflation has been running above the target rate. Expectations still put headline CPI up 3.1% from the comparable period a year ago, and core CPI up 2.8% year-over-year.