The Euro advanced against the US Dollar, adding 0.2 percent as Asian stocks followed Wall Street higher, sapping demand for the safety-linked greenback. The British Pound was little changed. We remain flat EURUSD and GBPUSD.

Australian Employment figures surprised sharply to the upside, showing the economy added 45,900 jobs in June, easily topping consensus forecasts calling for a 15,000 increase. The Unemployment Rate held unchanged from the previous month, but the May result was revised lower to 5.1 percent – the lowest since January 2009 – amounting to an overall better outcome than had been expected. Taken together with the previous two months, the June result caps the strongest quarter of employment growth in nearly four years.

The Australian Dollar soared against all of its major counterparts after the outcome crossed the wires as traders bet that aggressive hiring will boost wages and put upward pressure on overall inflation. Indeed, a Credit Suisse index tracking priced-in rate hike expectations shows traders now see a 25 percent chance that the RBA will increase borrowing as soon as August; the metric previously suggested that traders had written off any near-term tightening since mid-May.

Notably, the report was not without its vulnerabilities. Jobs growth was strongest in Western Australia, where the mining boom continues do drive aggressive hiring, outpacing other regions of the country by nearly five times. China has been the strongest engine of demand driving the sector’s expansion, and firms there now face an administration in Beijing that is determined to slow the buoyant economy amid fears of asset bubbles and runaway inflation. It remains to be seen what this means for Australian employment overall, but the outlook seems ominous over the medium term.

Elsewhere on the calendar, Japan’s Current Account surplus narrowed for the second consecutive month in May, printing at 1205.3 billion yen as imports soared again, adding 7.9 percent after rising 8.2 percent in the previous month. A stronger Japanese Yen may be stoking increased demand for foreign-made goods. Indeed, in trade-weighted terms, the currency ended May at the highest level in 16 months and added a further 4.1 percent in June, hinting that imports will likely remain well-supported in the near term. 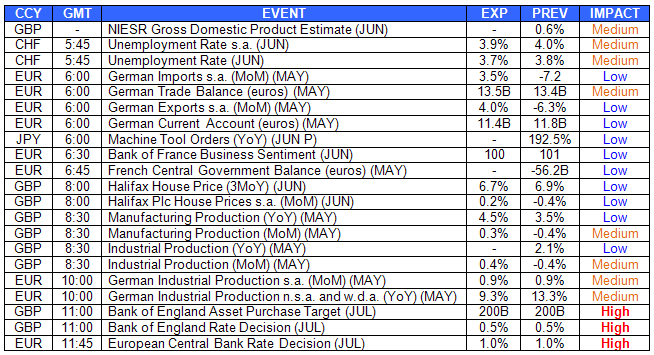 Interest rate decisions from the European Central Bank and the Bank of England headline the economic calendar. While any significant changes in the key elements of monetary policy are unlikely in both cases, the outcomes may still prove to stoke significant volatility around currency markets.

Looking first to the UK, the BOE is poised to deliver the first policy announcement since the government unveiled an ambitious emergency budget that promised to slash the deficit by 6.3 percent of GDP by 2014-15. The central bank’s statement (or lack thereof) will be closely scrutinized for its take on the merits of the ruling coalition’s plans and their feasibility. On balance, the embrace of austerity is likely to have dire implications for economic growth considering government spending has outpaced private demand since early 2008, hinting that Mervyn King and company may need to introduce yet more support to prevent a backslide into recession. That said, a willingness to proactively deal with the fiscal shortfall (particularly if it is endorsed by the BOE) may boost the British Pound in the near term despite the possibility of further easing down the road as traders size up UK policymakers against their counterparts in continental Europe and the US.

Turning to the Euro Zone, the ECB rate decision may prove to be a non-event, with policymakers hardly in a position to significantly tinker with monetary policy given the currency bloc’s precarious position as it continues to digest the sovereign debt crisis. That said, traders will pay close attention to any announcements – whether in the statement accompanying the rate decision or Jean-Claude Tichet’s subsequent press conference – of new long-term repo operations. Last week’s expiry of the ECB’s 12-month repo, a lending facility allowing European banks to secure access to the central bank’s funds at a low interest rate for a year, brought a decline in available liquidity and put upward pressure on short-term borrowing costs and sent EURUSD higher as the spread between German and US 2-year bond yields narrowed to just 9bpsfrom 31bps just a month ago. Higher borrowing costs seem like just the opposite of what the ECB would like to happen as the currency bloc’s governments lurch toward austerity, so the introduction of new facilities to boost the money supply seem reasonable, with any such outcome likely to weigh on the single currency.