The Euro and the British Pound tracked higher, adding 0.3 and 0.1 percent against the US Dollar as stocks edged higher in Asian trade, weighing on demand for the safety-linked currency. We remain short EURUSD at 1.4881. 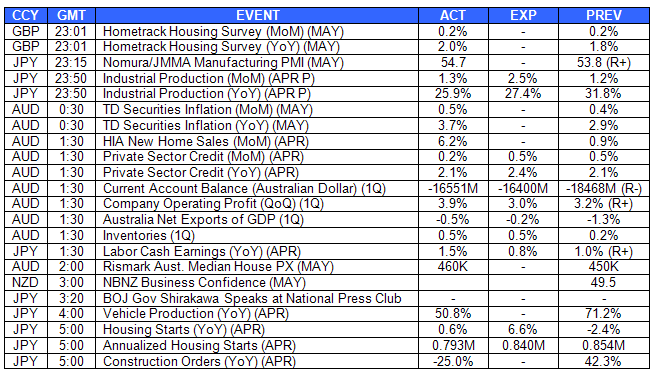 The Japanese Yen tumbled against all of its major counterparts, undermined by rising political uncertainty and disappointing manufacturing data. A poll published by Nikkei English News showed that 63 percent of Japanese voters favor the resignation of Prime Minister Yukio Hatoyama and the Social Democratic Party (SDP) abandoned the ruling coalition government after its leader – Mizuho Fukushima – was fired from her cabinet post two days ago for refusing to endorse a plan to relocate a US marine base to the island of Okinawa. Preliminary Industrial Production figures showed that output added 1.3 percent in April, falling short of economists’ forecasts for a 2.5 percent increase. Vehicle production – Japan’s top export industry – declined for the first time in at least six months and forecasts for May and June pointed to significant further slowing in output growth (-1.4 and -2.6 percent, respectively). The outcome underscores cues seen in last week’s labor market figures, hinting that firms may be turning pessimistic about future demand as China, Japan’s leading overseas market, is taking proactive steps to slow its buoyant economy amid fears of asset bubbles and runaway inflation.

Australian economic data presented a mixed bag of outcomes. A monthly Inflation gauge from TD Securities put the annual pace of price growth at 3.7 percent in May while New Home Sales surged 6.2 percent in April according to a report from the Housing Industry Association (HIA), both seemingly supportive of further monetary tightening. First-quarter Current Account figures also looked encouraging as the broadest measure of Australia’s external deficit narrowed for the first time since the three months ending December 2008 as exports advanced on the back of 10 percent increase in overseas metal ore and mineral sales. On the other hand, Private Sector Credit added 0.2 percent in April, underperforming expectations for a 0.5 percent result and marking the smallest gain in five months, which seems to point to a restrictive borrowing environment and argues (at least) a pause in the central bank’s rate-hike cycle. On balance, traders appear to be pricing in a shift toward a neutral policy setting from here, with no chance of an increase in the benchmark lending rate when the RBA meets this week and no further tightening for the following 12 months.

A preliminary estimate of May’s Euro Zone Consumer Price Index reading is expected to show the annual inflation rate accelerated to 1.7 percent, the highest in 17 months. The outcome is unlikely to stir much of a reaction however with price growth still below the European Central Bank’s 2 percent target level and policymakers surely in no position to raise rates given the sovereign credit meltdown on the currency bloc’s southern periphery. In fact, the central bank moved ahead with its own version of quantitative easing earlier this month.

UK and US markets will be closed for the Spring Bank Holiday and Memorial Day holiday, respectively, pointing to thin liquidity conditions that may amplify volatility and boost FX transaction costs over the coming 24 hours of trade.