US Dollar Poised to Extend Gains as Risk Aversion Continues

The Euro and the British Pound fell 0.3 and 0.4 percent against the US Dollar in overnight trade as the greenback rallied on safety demand with Asian stocks still reeling from Chinese slowdown fears after yesterday’s firm inflation and new loans figures. We remain short EURUSD at 1.4881.

Australian Home Loans for owner-occupied properties fell for the sixth consecutive month, down 3.4 percent in March as mortgage rates increased after the central bank tacked on 1.5 percent to borrowing costs over the past seven months while the government reduced grants to first-time homebuyers to A$7,000 from A$21,000 in January. Meanwhile, Investment Lending increased 3 percent – the most since August 2009. Indeed, the growth rate of investors’ borrowing outpaced that of owner-occupiers by the most in two years in the first quarter, hinting that early signs of a property bubble may be emerging. 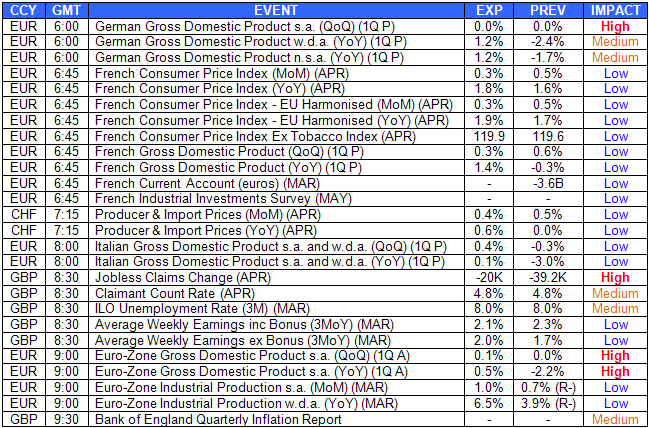 A busy economic calendar is ahead in European hours. First, a preliminary reading on Germany’s Gross Domestic Product figures is set to show growth stalled for the second consecutive quarter in the three months through March. The outcome may weigh heavily on the Euro amid expectations that the Euro Zone’s top economy will slip back into recession as the current slowdown is amplified by rising borrowing costs driven by a need to finance debt taken on to meet its obligations in the nearly 1 trillion euro EU stabilization fund announced earlier this week. Germany announced earlier today it would commit up to 123 billion euro (6.9 percent of its 2009 fiscal deficit) to the effort and may even boost its share by a further 20 percent, according to government spokesman Christoph Steegmans. The broader Euro Zone Gross Domestic Product reading is set to show that region-wide output added 0.1 percent in the first quarter after stalling in the preceding period.

Meanwhile, UK Jobless Claims are expected to shrink by 20,000 in April, marking the third consecutive monthly decline and bringing the number of people relying on benefits to the lowest in a year. Taken in the context of news that a coalition between the Conservative and Liberal Democrat parties set to form the incoming UK government will scrap outgoing Labour’s plan to increase employers’ payroll tax (which was to take effect in April 2011), the outcome may boost the outlook for hiring and consumption, lifting the British Pound. Separately, the Bank of England is set to publish its updated quarterly inflation report.

The risk sentiment landscape remains tenuous with European and US equity index futures trading sharply lower, the former by over 1 percent and the latter by 0.3 percent, pointing to continued gains for the safety-linked US Dollar and Japanese Yen against their major counterparts.