The Euro scored marginal gains on the US Dollar in overnight trading, adding 0.2 percent. The British Pound diverged from the single currency, slipping 0.1 percent against the greenback. We remain short EURUSD at 1.4881 and GBPUSD at 1.5765. 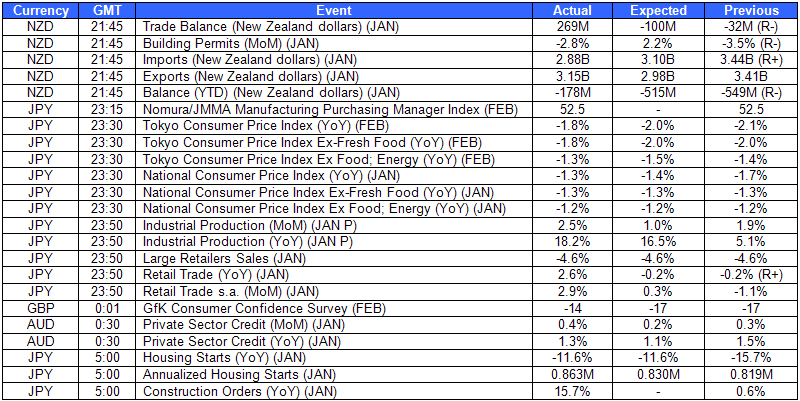 New Zealand’s Trade Balance deficit narrowed to -NZ$178 million in the year to January – the smallest in over seven years – as imports fell 11.9 percent to mark the tenth consecutive month of losses, outpacing a 0.6 percent drop in exports. Inbound shipments have dropped to the lowest level in five years as the unemployment rate rose to a decade high of 7.3 percent, trimming disposable incomes and weighing on spending. The outcome is all the more ominous considering the New Zealand Dollar added an impressive 26.4 percent in the year to January, which would be expected to have supported imports by boosted domestic purchasing power. This does not speak well of the outlook for private consumption – the largest component of overall economic growth – and hints that it may be some time before the Reserve Bank of New Zealand considers increasing interest rates.

In Japan, a hefty dollop of economic data failed to excite the markets as all of the scheduled releases printed in line with established themes that traders have long since priced into exchange rates. The Consumer Price Index dropped 1.3 percent in the year to January, extending deflation (albeit at a slightly slower pace than expected) for yet another month and assuring that Bank of Japan monetary policy remains “extremely accommodative”. Meanwhile, Industrial Production outperformed to add 2.5 percent in January amid expectations for more modest 1 percent increase following analogous outcomes in recent machine orders and exports figures. As with those outcomes, the result is firmly grounded in stimulus-driven overseas demand and so says fairly little about the sustainability of recovery in the world’s second-largest economy. Even a spike in the Retail Trade figure was broadly ignored despite an impressive 2.6 percent increase in the year to January that dwarfed expectations for a 0.2 percent decline. In fact, Japanese retail activity typically spikes around this period to reflect the beginning of Shōgatsu, the New Year holiday period (which can last between one to seven days).Food and beverage sales drove the metric higher, bolstering the case for a one-off seasonal explanation for the uptick. On balance, the Japanese Yen ignored the data docket, trading lower as higher stock prices boosted carry trades at the expense of the perennial funding currency.

Australian Private Sector Credit expanded at a slightly faster pace than economists expected, adding 1.3 percent in the year to January. That said, the outcome is broadly in line with recent figures and follows the slowest quarter of private credit growth in over 16 years, underscoring the trends cited by the Reserve Bank of Australia when it opted to keep interest rates on hold in February saying “lenders have generally raised [more than benchmark borrowing costs over recent months.” Minutes from that policy meeting revealed that the central bank take time to wait and see “more information on how the economy was responding to the monetary tightening that had already occurred,” with tepid credit growth over recent months hinting it may remain on hold once again next week. Traders currently see a 50 percent chance of a 25bps increase at the forthcoming announcement according to a Credit Suisse gauge of priced-in expectations.

Preliminary UK Gross Domestic Product figures are set to show the economy added 0.2 percent in the fourth quarter, topping the 0.1 percent increase recorded in the three months through September. However, traders are likely to look past the headline figure for the source of expansion amid growing concerns that last year’s global rebound may lose momentum amid the fading effects of stimulus measures. A narrow improvement in Private Consumption coupled with an equally small decline in Government Spending seem to be encouraging, but a dramatic slowdown in Gross Fixed Capital Formation (a measure of private investment) and its implications of stubbornly high unemployment may prove hard to swallow.

Turning to the Continent, the final revision of the Euro Zone Consumer Price Index is expected to confirm that prices added 1 percent in the year to January, the largest increase in 11 months. However, the outcome is unlikely to prove particularly market-moving considering its limited implications for future monetary policy. Indeed, inflation is out of negative territory but still well below the European Central Bank’s target of 2 percent, meaning Jean-Claude Trichet and company can afford to remain on the sidelines at a time when they have every incentive to do so considering the difficult task of balancing the competing objectives of stronger and weaker Euro Zone economies amid a brewing sovereign credit crisis. Traders seem to agree, seeing no chance of a rate hike at the next ECB policy meeting and forecast only 50 basis points in tightening over the next 12 months according to a gauge of priced-in expectation from Credit Suisse, amounting to the most lukewarm rates outlook in over six months.