Tomorrow brings the Non-farm Payrolls release covering data for the month of December, and given the outlay at last month’s FOMC rate decision, this will be a highly-watched release. While the bank opened the door to a series of rate hikes in 2022, Powell also said that this was contingent on the U.S. economy hitting and remaining at ‘full employment’ before any hikes would take place.

This is the first NFP report since then and rates markets don’t appear ready to settle down as the 10 year yield is now trading at a fresh seven-month high. This has also started to impact stocks and currencies to a degree, and the release of yesterday’s FOMC minutes appeared to garner considerable attention for the same message that was seemingly ignored three weeks prior.

So this puts considerable emphasis on tomorrow’s NFP. But, the bar is set incredibly high already with rates markets expecting 3-4 rate hikes by the end of the year out of the U.S. and the FOMC. So, it seems as though the situation is priced to perfection, and there may even be some asymmetry in tomorrow’s report as disappointment or downside could possibly lead to a larger bearish move than a surprise could on the upside.

For the US Dollar – the currency remains in range, much as it has for the past six weeks. The USD has now remained mean-reverting through both Thanksgiving and Christmas holidays and there’s no signs yet of that letting up.

On the support side of the matter are two levels of note: the 95.86 Fibonacci level and below that the 95.52 swing low. Above current price action, the 96.47 Fibonacci level looms large but range resistance remains all the way up at 96.94. For this to get taken out tomorrow we’ll likely need to see an aggressively strong beat to the headline number, coupled with strong wage growth and an unemployment rate of 4% (expectation of 4.1% currently). 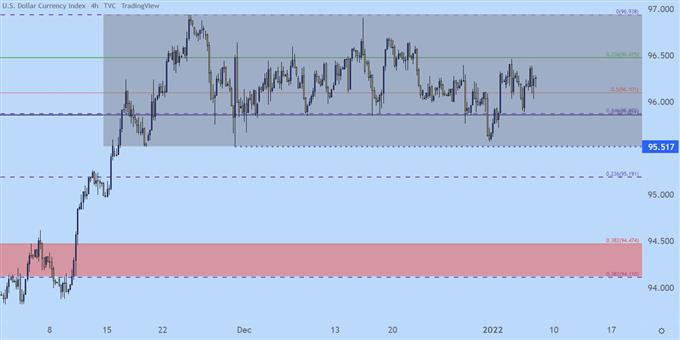 I’ve talked about this premise multiple times over the past year but there are few scenarios where the US Dollar can trend without at least some participation from the Euro. After all, the Euro is more than 57% of the DXY quote so that one FX market has incredible pull on the larger composition of DXY.

That said – EUR/USD ran into a major spot of support in November and has since stalled, which has led to this continued range in both USD and EUR/USD.

The support in question is from longer-term charts and resides between spot rates of 1.1187-1.1212, each of which are longer-term Fibonacci levels. I had highlighted this support back in November and almost two months later, it remains.

At this point it appears that sentiment is going to need a bit of a reset if bears are, in fact, going to be able to tip this lower while taking out that support. There’s a resistance zone here of relevance from 1.1448-1.1500. This was a prior spot of support and if we can get some pullback, there’ll likely be a number of stops on bearish positions triggered on the way up to that zone. This can re-open the door for sellers to re-enter on the premise of a lower-high.

While we wait for the Federal Reserve to start opening the door to rate hikes, the Bank of England is already there and this was a saga that played-out throughout Q4 of last year.

The bank was expected to hike in November. When they didn’t the pair put in an aggressive move of weakness while jumping down to a major area of support. The bull flag that had been building for the entire second-half of the year was on the verge of being invalidated: The 38.2% Fibonacci retracement of the 2020-2021 trend was holding prices by a thread.

And then the BoE hiked in December and buyers got back on the bid. At this point, prices have almost traveled the entirety of the channel and are nearing the resistance side of that formation. I had highlighted this backdrop on Tuesday of this week and since then prices have continued to hold near short-term resistance.

Tomorrow should provide a key test here and the ideal scenario (at least to me) seems to be looking for USD-strength to allow for a pullback, at which point support potential may show around prior resistance of 1.3354, which could then allow for bullish continuation strategies into next week and thereafter. 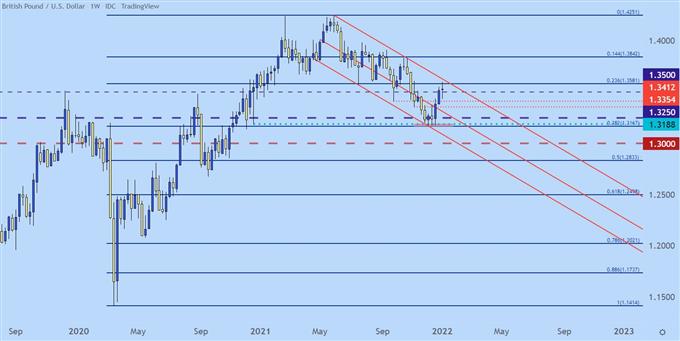 The Australian Dollar was extremely weak throughout November, eventually finding some support at the psychological .7000 handle in early-December.

That level was enough to turn the tides: A bullish trend then started that pushed price back up to a key spot of resistance almost 300 pips away . The resistance that came into play here was the 50% marker of that November sell-off move.

A bearish move on Monday found higher-low support, at which point a resistance re-test came in. But, this time bears made their presence known, pushing prices below a rising wedge formation. This keeps the door open for bearish continuation. There’s lower-high resistance potential around the .7200 handle, a spot of prior support.

This could be one of the more compelling long-USD scenarios going into tomorrow’s NFP report.