US Dollar Price Outlook: USD Awaits a Big Week on the Econ Calendar

US Dollar Bounces From Support After Rising Wedge Break

The US Dollar came into this week with a full head of steam: After a bounce began a couple of weeks ago, with support coming in at a huge level on the chart, USD prices began to trend-higher and that lasted into the end of last week. This week’s open, however, showed different tonality as sellers were on the prowl and price action began to break down.

As looked at on Monday, that bounce in the US Dollar took on the form of a rising wedge formation. Such formations will often be approached with the aim of bearish breakdowns, looking for the same lack of enthusiasm shown by bulls upon tests of new highs to, eventually, play through for a break of support. That took place on Monday afternoon and continued through early-Tuesday; with another item of support coming into play around 96.47.

Since that support came into play on Tuesday morning, US Dollar prices have been running-higher, off-setting a large portion of that early-week sell-off. Resistance at this point is coming in around the 97.50 level on DXY.

The big question is whether this bullish trend may have legs for a deeper drive; or whether the bearish theme that showed up in late-May is gearing up for another run. The rising wedge break earlier this week stopped short of testing that big zone of support that had come into play two weeks ago: This zone is a confluent area on the chart with two long-term Fibonacci levels in close proximity at 95.86-96.05.

This zone of support has been in-play multiple times over the past years; and if it weren’t for the mayhem in March, this would be the yearly low in the US Dollar.

Can the US Dollar Breakdown to Fresh Lows?

Given the backdrop, along with recent price action and focus on that bearish trend from late-May into early-June, and there could be greater bearish potential here. Whether we see that or not, and how quickly that might come into play, could be decided over the next week as a busier economic calendar awaits.

Tomorrow brings PCE numbers and Michigan Consumer Sentiment, next Tuesday brings consumer confidence numbers, and next Wednesday looks to be busy as PMI numbers in the morning lead into FOMC minutes later in the afternoon. And somewhat of a unique situation shows up on Thursday morning, as NFP numbers are set to be released. This is odd as these reports are generally released on the first Friday of the month; but given that the 4th of July is on Saturday and Friday the 3rd will be the Federally-observed holiday; this month’s NFP will be released on Thursday morning at the usual 8:30 AM ET.

This is prime opportunity for trends to show themselves; and that statement can be spanned across USD and USD-pairs, into commodities and stocks, as well.

DailyFX Economic Calendar – US items For the Next Seven Days 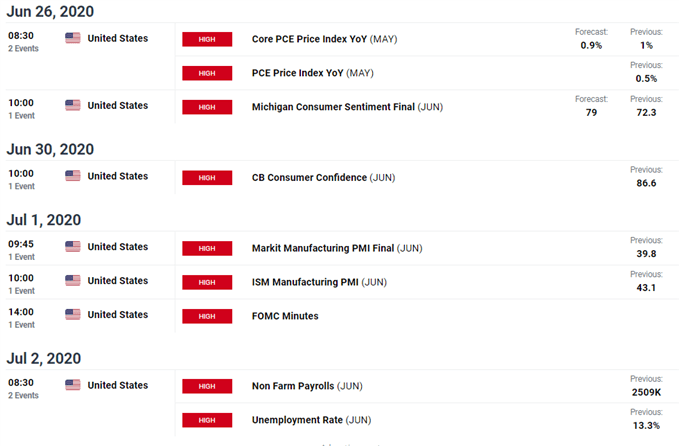