A Big Week for the US Dollar

This is going to be a big week for the US Dollar. The economic calendar is loaded with USD-related items and there’s also key rate decisions taking place in Canada and Japan to go along with the FOMC on Wednesday. So, buckle up as volatility is likely on the way.

Wednesday is especially busy. The Fed announces their October rate decision at 2PM at the bank is widely-expected to cut rates for the third consecutive meeting. But before that we hear from the BoC for their October rate decision, and earlier that morning brings the BoJ rate decision along with some key European data prints in German unemployment and CPI. Out of the US – there are high-impact releases every day of the week Tuesday-Friday, with Friday bringing both Non-Farm Payrolls and a recent sore spot for the US economy with ISM manufacturing.

DailyFX Economic Calendar: High-Impact US Data for This Week 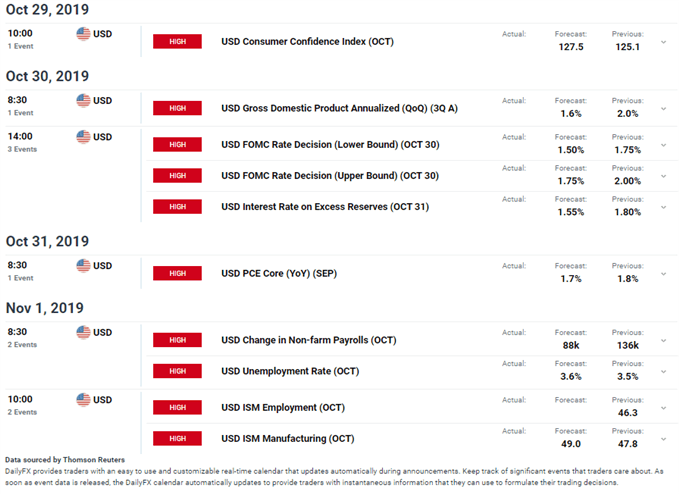 US Dollar Reversal Pulls Back to Resistance

So far in Q4 the big item of interest has been the reversal in the US Dollar. The currency came into Q4 with a full head of steam, setting a fresh two-year-high on the first trading day of the quarter. But after that, the proverbial music stopped for the bullish theme as a series of bad US data prints helped to bring out the bears. Key for that early-month reversal was another poor ISM manufacturing report, which we’ll get the most recent print of on Friday just an hour and a half after NFP’s.

Last week saw sellers pullback on the throttle, owed at least partly to the busy outing on this week’s economic calendar.

Last week marked Mario Draghi’s final rate decision atop the ECB and Christine Lagarde will head the bank from November onward. After an aggressive burst of strength in the first-half of this month, EUR/USD has calmed and started to pull back, finding a bit of support around the 1.1082 level that was looked at in last week’s webinar. But buyers haven’t exactly been able to take-over matters yet, either, leaving EUR/USD in a precarious spot on the chart. A hold of this support combined with a push back above the Friday swing high around 1.1125 can re-open the door for topside scenarios, while a further break-below the Friday low re-opens the door for a re-test of the 1.1000 psychological level.

Also of issue this week is the Brexit deadline, set for 10/31 or this Thursday. The British Pound remains relatively strong, holding on to a large portion of the gains from the early-month breakout in GBP/USD. That breakout ran into some rather imposing resistance at the 1.3000 handle, and buyers haven’t yet been able to leave it behind. The corresponding pullback from that resistance has remained rather smooth, setting up within a bull flag formation.

Current support is showing around the 23.6% retracement of the recent bullish breakout. The 38.2% marker from that same study falls in a confluent zone that was used for higher-low support a couple of weeks ago, spanning from 1.2671-1.2705.

This should be a big week for USD/CAD. Not only do we have the flurry of US drivers on the calendar but the Wednesday Bank of Canada rate decision will likely be volatility-inducing. And while many pairs have pulled back on the basis of the US Dollar’s move last week, USD/CAD sellers have continued to push despite a big swath of support coming into play, and just below sits the yearly-low ominously above the 1.3000 psychological level.

Given the stretched downside move, combined with a couple of very key drivers on the horizon for Wednesday, and this could be a difficult spot to establish fresh bearish exposure. More attractive, however, would be a pullback to lower-high resistance at or around a prior spot of support, such as the 1.3132-1.3150 zone on the chart.

Given the early-month sell-off in the US Dollar, it might be surprising that the net move in USD/JPY was higher. But this was driven by an even weaker Japanese Yen than what showed in USD, and the pair rallied up to a fresh two-month-high even as USD sellers remained in-control. At this point, USD/JPY price action has spent much of the past week-plus building into a range near resistance. This keeps the pair attractive for long-USD strategies going into this week’s batch of USD-drivers, with the 109.67-110.00 looming large above current price action.