US Data in the Spotlight as Q4 Reversal

The US Dollar continues to hold support after a rather visible reversal showed around the Q4 open. And in the days ahead a significant chunk of USD-risk remains on the economic calendar, with highlights such as Monday’s Advance Trade Balance, Tuesday’s US Consumer Confidence numbers and, of course, the big one next Wednesday with the October FOMC rate decision. I had discussed this in-depth yesterday, looking at attractive scenarios on either side of the USD, honing in on Gold for USD-weakness and USD/JPY for USD-strength. The week isn’t finished with the Fed, however, as the following morning brings the FOMC’s preferred inflation gauge of PCE for its release of September data, and Friday brings Non-Farm Payrolls. So next week will be huge for the US Dollar. 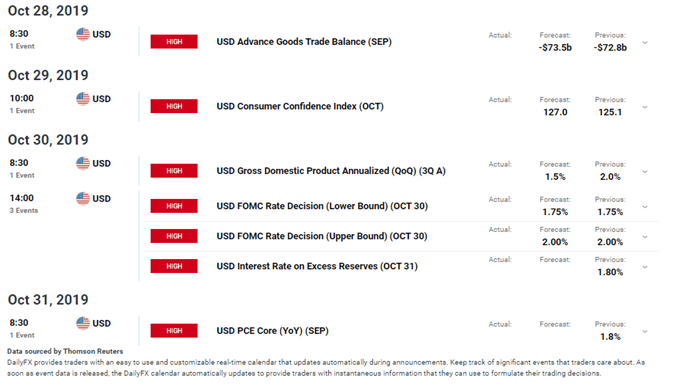 Ahead of next week’s driver outlay, the US Dollar has paused in the Q4 sell-off, holding support set last Friday so far through the week. Buyers haven’t exactly made a dent in that sell-off however, as that bounce ran into resistance ahead of the 97.70 level yesterday. The price of 97.70 has been a big one in the recent past for DXY, as this is the same level that helped to set a double top in November and December of last year. This came in as the swing-high again in March of 2019 and the same thing showed up in June.

Taking a step back to look at the bigger picture, the USD sell-off in the first few weeks of October brought upon a bearish cue with a break-below a rising wedge formation that’s been brewing for the past couple of years. The currency came into Q4 with a fresh two-year-high on the first trading day of October. But, since then, that bullish theme has taken a back seat to bearish reversal scenarios, and price action put in a concerted downside move to push below the support side of that formation. This can keep the door open for bearish strategies but, as mentioned above, numerous drivers remain on the calendar and this can keep a multitude of potential scenarios on the table.

Today brought ECB President Mario Draghi’s final meeting atop the European Central Bank. As widely expected, nothing much was discussed by way of new information and November will mark the start of incoming President Christine Lagarde’s tenure. And despite the expectation for even weaker policy in the months or perhaps even years ahead, the Euro has put in a strong bounce so far in Q4 on some positive developments on the Brexit-front.

Current price action in EUR/USD, however, is a bit more difficult to work with. Last week’s bounce from the ‘nexus’ of support propelled the pair up to fresh monthly highs. But that run stalled just shy of a big resistance zone; and the pullback yesterday found support at another key price around 1.1109, which was the September swing-high in the pair.

GBP/USD: British Pound Batters 1.3000 but Can Bulls Break Through?

The British Pound support play off of the trendline looked at in August has held fairly well through October trade, with the pair re-engaging with the 1.3000 psychological level. Buyers, however, haven’t shown much tolerance for pricing above that line-in-the-sand, however, and at this point, we’ll likely need another gasp of either Sterling strength or USD-weakness to pull that scenario off. Alternatively, deeper pullbacks can become attractive, particularly if the USD can continue to claw back prior losses ahead of next week’s FOMC rate decision. In Tuesday’s webinar, I had looked at higher-low support potential around the 1.2750 level, and that remains a workable theme until the 1.3000 level is cleared.

USD/CAD Tip-Toes Down to Three-Month-Lows

Also on the short-side of the US Dollar I’ve been following USD/CAD, which is currently in the process of testing a big zone of longer-term support. As looked at on Monday there was a confluence of numerous levels in between 1.3000-1.3100, and after a mild bounce from a bullish trendline projection, sellers have come back to push prices down to a fresh three-month-low, taking out the 1.3065 Fibonacci level.

Currently below price action is a batch of July lows around the 1.3000 psychological level, both of which could act as those next stops of support.

USD/JPY: Can Bulls Continue to Push?

On the long side of the US Dollar, USD/JPY remains compelling. Even when USD was spilling-over in the first part of Q4, USD/JPY remained relatively strong, aided in part by an even-weaker Japanese Yen versus what was showing in the US Dollar. This allowed for the pair to eventually push up to a fresh two-month-high, testing above a big zone of resistance that turned around prior advances in mid-September and early-October. This runs from 108.47-108.70, and buyers have since come back to help show higher-low support around this level.

If USD-strength does show with prominence around next week’s drivers, the topside of USD/JPY remains as interesting. Below, we can see a confluent of support helping to set today’s lows as taken from a bullish trend-line produced by swing lows over the past few weeks.