The fourth quarter of last year marked a visible change-of-pace across global markets. After riding a smooth uptrend through Q2 and Q3 of 2018, equity prices took a nosedive after the Q4 open, driven by an off-handed comment from FOMC Chair Jerome Powell regarding rate policy. The Fed Chair opined that he felt that the neutral rate was ‘a long way off,’ indicating that the bank had plans for more rate hikes through the 2019 open. Global markets didn’t like this one bit, and two-and-a-half months later with the S&P off by almost 20%, this fact became rather clear.

That didn’t stop the Fed from hiking in December, however, nor did they cut their forecast for 2019 hikes entirely. The bank still said that they were planning for two hikes in the next year and that only hastened the decline into the Christmas holiday.

Matters eventually began to turn around the yearly open, right as various Fed speakers talked up the prospect of slowing down on rate hikes and, eventually opening the door to rate cuts. That’s what’s helped to buoy risk markets so far in 2019 and here we are, a year later, and that theme remains in the spotlight.

The Fed, at this point, has cut rates twice this year as opposed to the two hikes they had forecast last December, and to be sure, this has helped risk markets to stay afloat. But – the bank has also been hesitant to commit to much more, allocating the 50 bps of softening so far to ‘mid cycle adjustments’ or ‘insurance rate cuts.’ And given the fact that most other large Central Banks are fully-fledged in dovish patterns of loosening, the US Dollar showed gains into the Q4 open as the ‘cleanest shirt in the dirty laundry.’ This drove the currency to fresh two-year-highs earlier this week.

Similar to what’s been seen throughout this year, the US Dollar driving to fresh highs elicited a response from President Trump’s Twitter account. This, combined with a very poor manufacturing ISM report on Tuesday has helped to moderate that USD-strength, creating a pullback that continues to drive ahead of tomorrow’s NFP report. 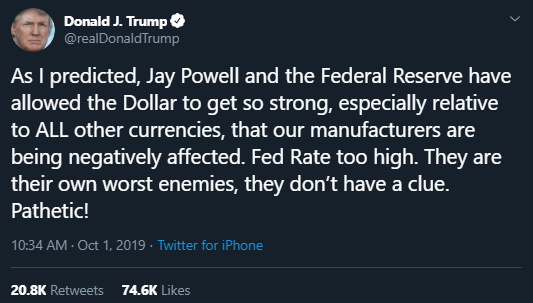 On a longer-term technical basis, given this proclivity for USD-strength and FOMC policy to come under fire as the currency pushed up to fresh highs, a bearish formation has built in the US Dollar. A rising wedge will often be approached for bearish reversals as buyers exhibit trepidation at-or-around highs while remaining vigorously bullish near support. This type of formation will often play out with that vigor at support giving way as continued trepidation shows around resistance. This is a large reason why USD-weakness was the focus for the Q4 Technical Forecast in the US Dollar.

There are two FOMC rate decisions remaining in 2019, with December being the next quarterly meeting at which the Fed will provide updated forecasts. Of key importance is whether the bank cuts rates again this year or whether they try to hold pat in the effort of remaining stable. A miss on the headline number or, perhaps more importantly, the Average Hourly Earnings portion of the report could elicit even more USD-weakness ahead of the FOMC rate decision due at the end of this month.