The September FOMC rate decision is now in the books and, at this point, nothing has yet broken. The range in the US Dollar remains despite the near-term volatility that showed on Wednesday, and the focus now moves on to next week’s economic calendar where a series of headline events offers the potential for volatility. Pertinent to the US – consumer confidence is released on Tuesday and Friday brings both durable goods and PCE, the latter of which is the Fed’s preferred inflation gauge so any print far away from the 1.6% showing last month could evoke some volatility. Outside of those data prints, RBNZ and Banxico rate decisions are on the calendar for Tuesday and Thursday, respectively; and a series of Central Bank speeches litter the calendar throughout next week.

DailyFX Economic Calendar – High-Impact for the Week of September 23, 2019 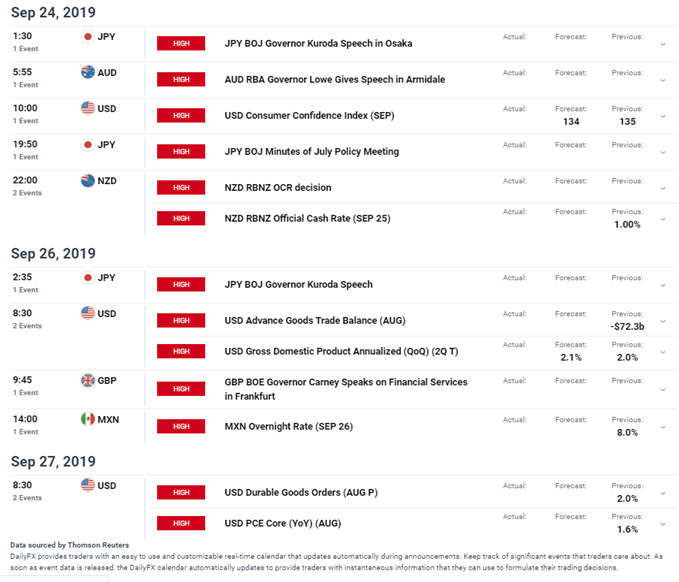 US Dollar Range Remains Through FOMC

There was a lot of potential for volatility around this week’s FOMC rate decision but, at this point, it would probably have to be chalked up as a win for Jerome Powell given the lack of drama that’s shown so far after this rate cut. The Fed chair again pointed to the rate cut being more of an ‘insurance rate cut’ rather than a new trend of softening, and the dot plot matrix wasn’t really that clear as to what the Fed is expecting later in the year.

It is, however, far too early to call this theme as ‘over,’ as a number of items remain of interest and there still remains divergence between market and FOMC expectations for rates later in the year, specifically looking at rate decisions in October and December. But, for now, the US Dollar is trading in a range that’s been going for a couple of weeks and until something changes, traders would likely want to move-forward with that in mind. For those that do want to take a directional bent on the matter, a trend-side bias could be added to this near-term range: For bears, that would entail selling resistance and moving stops to break-even, while scaling out around support. If prices do break out, those bears could be served well while if the range continues, the remainder of the position could be stopped at entry to prevent giving back prior gains.

EUR/USD: Can Bears Make a Push?

Similar to the US Dollar, EUR/USD has been mired in a non-directional state for most of September, even with the ECB announcement of more stimulus last week. The prevailing thought that the dovish move at the ECB would help to push the Fed into a more-dovish posture hasn’t yet come to pass, and this could eventually bring Euro downside back into focus. But, for now, the choppiness in September thus far defines the backdrop.

The bullish trend in GBP/USD has continued through this week. This comes after a brutal bearish trend drove the pair into the August open, with a long-term trendline eventually coming into play. But last month saw buyers step into the equation and the net of last month’s price action in Cable was a doji. Buyers have continued to push so far in September, helping to bring on fresh seven-week-highs as a big zone has been crossed on the chart at the 1.2500 psychological level. This can keep topside in the pair as an attractive theme, and for traders looking to take a bearish stance in the US Dollar, this is likely one of the more attractive candidates considering that they’re comfortable with the volatility around Brexit headlines that continue to show some level of impact on the pair’s price action.

USD/CAD: Caught at Resistance, Can Sellers Make a Push?

Also of interest on the short side of the US Dollar is USD/CAD. Early September price action saw the development of a bearish trend as a longer-term reversal started to play out, with prices quickly rushing down to a key zone of support around the 1.3132 Fibonacci level. But that support stalled sellers and prices re-traced to another key zone on the chart, as taken from the 1.3250-1.3300 area, which is a zone of prices that held the lows in the pair for a three-month-period from mid-March into mid-June.

The big question now is which side will take-over next? There’s ample backdrop for trends in either direction, with intermediate-term views looking for short-side swings while shorter-term views could focus on bullish momentum and a support hold around 1.3250 after resistance played-in from 1.3300.

AUD/USD Turns – Are Bears on the Verge of Fresh Lows?

On the long side of the US Dollar, AUD/USD can remain as attractive. I had looked at bearish reversal potential in the pair in both webinars this week: First on Tuesday ahead of the Fed and then again yesterday after the move had started to fill-in, with sellers stalling at the first target area. As discussed in yesterday’s webinar, this short-term support could lead-in to a quick bounce up to resistance as taken from another prior support level, plotted around the .6830 level on the chart. This could keep the pair as one of the more attractive venues to look for USD-strength, with targets set towards re-tests of the ten-year-lows that came into play last month.