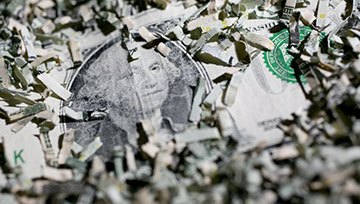 The US Dollar has continued to display sensitivity to near-term data as this morning’s Non-Farm Payrolls report has helped to extend the bearish theme in the Greenback.

If this sounds like a stark change-of-pace from last week, it is. Last week finished with a strong run of USD-strength and that scenario lasted through this week’s open and the Monday holiday in the US. Tuesday morning produced a turn from fresh two-year-highs, and later in the morning a very disappointing Manufacturing ISM report helped to really bring out the bears as that indicator printed in contraction territory and came in at its lowest since January of 2016. USD weakness remained through Wednesday trade and into Thursday morning, until the non-Manufacturing ISM report was released to a far different tune, printing at 56.4 v/s the expectation of 54. This was the 115th consecutive month of growth and, at a minimum, helped to offset some of the recessionary fears triggered by the Tuesday release.

This morning’s Non-Farm Payrolls was really a mixed bag. The headline number missed, coming in at +130k v/s the expectation of +150k. Last month was revised down, also not positive; but on a brighter note, Average Hourly Earnings jumped and the unemployment rate printed at 3.7%. So, a veritable mixed bag; but given the price action response, there’s been a fairly clear drive of USD-weakness so far after the release. After testing resistance at 98.50 earlier this morning, USD bears continue to push-lower.

Next week brings an ECB rate decision and the wide expectation is for the bank to be dovish. This should come as no surprise. It’s the ECB. The bigger question is one of action, as in, what might they actually do? Expectations since the July rate decision have really run the gamut.

At that last rate meeting in July, Draghi struck a balanced tone, or at least tried to, by noting that the bank didn’t even discuss the prospect of a cut at that meeting. The Euro responded by ripping-higher. And it was just hours after that when we heard ‘sources’ around the bank indicating that the ECB had all but agreed to a cut at their next rate decision in September. That takes place next week.

Along the way the prospect of stimulus and QE came into the equation. Olli Rehn said that the ECB was ready to do something ‘significant’ at the September rate decision. That was later walked back by multiple ECB members so it doesn’t really look like a QE announcement will be in the cards.

In Euro price action, last week produced a quick rush of weakness amidst low-liquidity conditions on Friday and that theme hung around until Tuesday. But as the US Dollar snapped back, EUR/USD rallied and prices have continued to hold on to that short-term theme of strength through this morning’s NFP report.

For next week – traders will likely want to remain on high alert around the single currency, carrying the expectation for the ECB to disappoint. Perhaps a 10 bp rate cut does come into play, but its unlikely that the bank will commit to much more than that with a new President taking over very soon.

On the long side of the US Dollar, there isn’t much that’s attractive, at least to me. One venue of potential and a pair that I’ve been following for such over the past few weeks is USD/CHF. This carries some of the European risk exposure but, they also have a Central Bank that’s been far more aggressive with interventions and currency weakness.

I had looked into the pair yesterday in the webinar, looking for support around the .9850 level. That filled in a few hours later and price action made a strong run back above .9900. This morning’s dash of USD-weakness around NFP has helped to push prices back to support at prior resistance, taken from around the .9875 area on the chart; and the bullish trend channel that’s been in-place for the past month still applies.

On the short-side of the US Dollar, USD/CAD remains of interest. This was a tough reversal setup to work with over the past few months as a series of themes have taken center-stage.

June brought an aggressive gust of weakness in the pair until sellers were thwarted just shy of the 1.3000 level. That led into a bullish reversal from mid-July into early-August with prices finding resistance at the 1.3345 level. After a false start two weeks ago, sellers finally found the motivation to push after a bit of capitulation showed this week, marked by an inverted hammer on the Daily after a failed run at resistance. The Bank of Canada rate decision on Wednesday helped, and this was furthered by a strong Canadian jobs report earlier this morning.

This keeps the pair as attractive for USD-weakness strategies, particularly as the BoC remains in wait-and-see mode while the Fed sits in front of more loosening, however aggressive that may be.

GBP/USD: Fundamentally, it’s a Mess. Technically, it’s Not as Bad

Technical traders have probably had a far easier time around the British Pound of recent than folks following fundamentals. The headlines remain a mess around both the US and the UK with political vitriol widely displayed on both sides, in both economies. I think at this point most rational people would admit that they have no clue how this is all going to pan out. That brings uncertainty, and markets abhor uncertainty, usually by responding with some element of risk aversion.

But, that’s been the case in the British Pound for some time now, hasn’t it? In March, GBP/USD was trading above 1.3000, earlier this week it tipped-below 1.2000, so that bearish expression has already shown in the pair to a great degree.

Perhaps more importantly for technical traders, a long-term trend-line came into play in early-August that finally helped to produce some support. Last month’s price action closed as a doji and with the 1.2000 psychological level so near, sellers have had a tendency to slow their approach around those lows.

But, over the past week, as USD-weakness has come back into order, GBP/USD strength has shown very visibly. There’s like a short-squeeze scenario taking place here but, that may not yet be over. Prices have held resistance at a key level, and this can keep the door open for further higher-highs and higher-lows, even despite the nasty headlines that will likely continue to show. This scenario remains attractive for strategies based around continued USD-weakness.