Fed day is here and later this afternoon, markets are heavily-expecting to get a rate cut out of the bank for the first time in more than ten years. The FOMC has hiked rates nine times in the past four years, and seven times in the past two. But as pressure began to show in risk markets in Q4 of 2018, the bank has slowly been bringing in a more-dovish outlook and the first half of this year was marked by diminishing expectations around US rates.

This is where the proverbial rubber meets the road: Markets have shown a 100% probability of getting a cut at this meeting for more than a month and there have even been vacillating expectations around seeing a 50 basis point cut. An off-hand comment from NY Fed President John Williams a couple of weeks ago was widely-inferred to mean that the bank was looking to be aggressive here. That scenario brought on a quick dose of USD-weakness as Gold prices broke out; but those themes soon softened when the NY Fed walked back those earlier comments from John Williams.

Price action in the US Dollar is set up for a big show, in one way or the other. Current resistance is and has been showing over the past four trading days inside of the two-year high. That two-year high was a prior double-top formation that formed after failed breakouts in April and May, keeping the door open for topside potential should fresh highs come into the equation. But if fresh highs do not show, the door remains open for short-side swings and this could likely be driven by a dovish-sounding FOMC to go along with a 25 basis point rate cut later this afternoon. 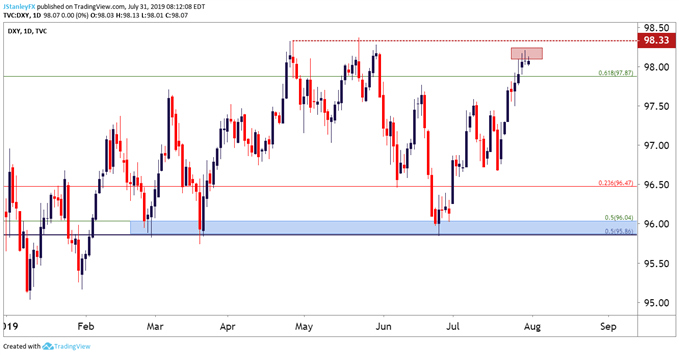 EUR/USD Bear Trap Remains at 1.1100 – Will Bears Get the Motivation That They Need?

EURUSD put in another bear trap scenario last week around the ECB. While the European Central Bank opened the door for a rate cut in September, as well as the possibility of future QE later in the year, Mario Draghi said that the bank didn’t even discuss cutting rates at last week’s meeting. That comment led to a firm topside rip after the pair had just tipped-down to the 1.1100 level; but similar to the scenario around the NY Fed and John Williams discussed above, a ‘clarification’ was later provided by an ECB ‘source’ that indicated that the bank is set and ready to cut rates in September. That brought sellers back into the mix but only for a short while, as this merely elicited a higher-low support inflection as price action has continued to respect the 1.1100 level.

What does this mean? Likely markets aren’t very excited about another ten basis point cut deeper into negative territory. For that breakdown potential in the Euro, we’re likely going to be looking for mentions or hints of another round of QE. And given the context around the bank, with Mario Draghi set to hand over the reins to Christine Lagarde later this year, we may have to wait for a bit before we hear details around that scenario.

GBP/USD Slalom Finds Support – But for How Long

On the long side of the US Dollar, GBP/USD remains as attractive. The pair has been in full break-down mode so far this week, extending a two-week bearish run around the prospects of a No-Deal Brexit scenario. As the political machinations continue in the UK, it’s unlikely that this prospect will soon be ruled out and potentially could remain in the headlines through October. Newly elected PM Boris Johnson appears unlikely to remove that option from the table, and this level of uncertainty could continue to unsettle market participants.

I began looking at the short-side of the pair two weeks ago, and after a quick resistance fill, sellers have remained in control. Support has finally shown over the past day just above the 1.2100 handle, adhering to a short-term bullish trend-line. Resistance potential exists from 1.2191-1.2211, and a break of the bullish trend-line can re-open the door for bearish strategies, targeting a test of the 1.2000 psychological level.

I had looked at the short side of the pair coming into this week, following for a move back down to Fibonacci support at .9902. That level has come back into play and there’s been a cauterization of support at this price.

This keeps potential open on both sides of the pair going into FOMC later today. On the long side, traders can hone-in on a hold of support, looking for prices to re-test .9950 and then the parity figure at 1.0000. On the short-side, a breach of this support opens the door for a move towards .9828 followed by longer-term support potential around .9750-.9767. I’m remaining in the bearish camp, as looked at in this week’s FX Setups.

A similar scenario as discussed in USD/CHF exists currently in USD/JPY. Prices put in a lower-high earlier this week, keeping the door open for bearish swing scenarios. And price action so far this week has tipped-lower, finding support at a Fibonacci level of relevance; keeping potential on both sides of the pair ahead of today’s FOMC.

For bullish scenarios, traders can hone-in on the hold around 108.47, looking for prices to re-test the 109.00 figure that came in as the early-July swing-high. Beyond that, another zone of resistance potential exists around 109.67-110.00, and this could function as a secondary profit target. On the short side of USD/JPY, a breach of the 108.47 short-term support opens the door for a move down to 108.00, followed by target potential at 107.50 and 107.00, which came in as the June swing-low. This is the side that I’ve been following as discussed in this week’s FX Setups.