US Dollar Price Outlook Ahead of the Fed: Bulls Drive, Key Resistance

US Dollar Drives Towards Two-Year-Highs Ahead of the Fed

The June swoon has led to the July drive and the US Dollar remains on the move ahead of the widely-anticipated FOMC rate decision set for tomorrow. The Federal Reserve is expected to cut rates for the first time in a decade, since last evoking emergency rate cuts in the midst of the Financial Collapse. The big question for tomorrow, however, isn’t whether the Fed’s going to cut rates; that’s fairly well baked in the cake at this point. More pressing is what the FOMC says about the rest of the year: Is tomorrow’s cut a simple nudge lower after the bank overtightened last year? Or, is this the start of a trend of softening that may last into next year.

At this point, markets are expecting at least 75 basis points of softening by the end of 2019. The Fed, thus far, has talked about the possibility of one, which looks to be what we’re getting tomorrow.

As that thought of a more dovish Fed was pricing-in to markets in the month of June, the US Dollar sold off for most of the period, dropping from a failed breakout in late-May at the 98.33 level and moving all the way below 96. But as the door opened into July, the Fed didn’t sound so dovish anymore, and with stocks back to all-time-highs after a really strong month of June, there was little wonder as to why. 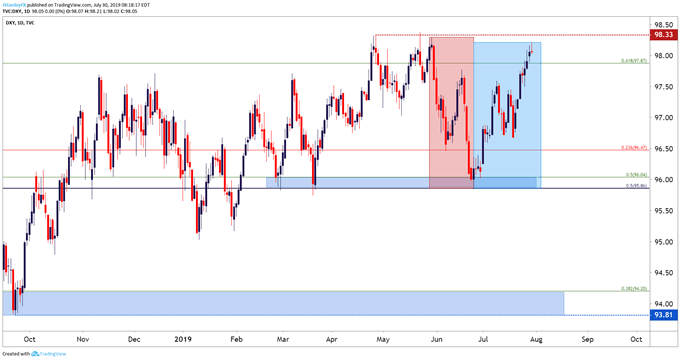 So despite the fact that the bank is widely-expected to cut rates tomorrow, the US Dollar has continued to rally through this month. The likely culprit here is just how dovish pretty much every other Central Bank is. The ECB is talking up a potential rate cut in September and maybe even QE. The Bank of England is expected to be dovish at their Super Thursday meeting later this week. The Bank of Japan remains as one of the more dovish Central Banks in the World, and the PBoC isn’t expected to be hawkish anytime soon, either. This leaves the Fed, with the one rate cut that they’ve opened the door to, as still one of the more hawkish CB’s out there.

With less than 48 hours to go, the US Dollar is making a fast approach towards a key level of resistance on the charts at 98.33. This level came-in as the swing-high in April and then again a month later, at which point bears pounced and drove prices-lower through the month of June. 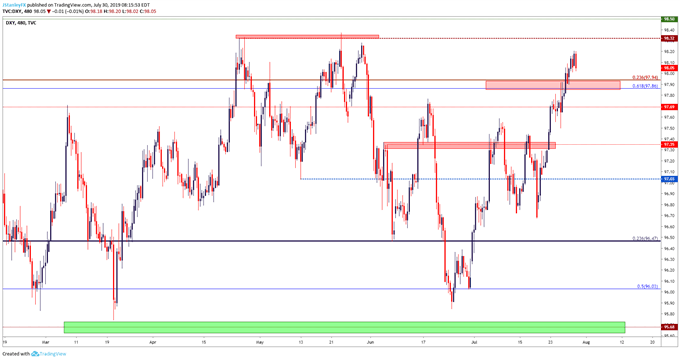 Most pressing to USD price action around the FOMC is the context with which tomorrow’s cut is framed. Is this a one-and-done, at least in the opinion of the Fed right now? Or is the bank open to more cuts down-the-road, even with stocks trading near all-time-highs, in the effort of staving off a potential slowdown that might be brewing?

As seen throughout this month, the US Dollar can most definitely rally even with the FOMC talking up softer policy. This keeps the door open for a possible breakout beyond that resistance around 98.32 as the Greenback drives to fresh two-year-highs. As looked at in this week’s FX Setups, there were a couple of areas of interest for long-USD exposure. I had focused in on GBP/USD and USD/CAD for such a purpose, and at this point GBP/USD has taken on a life of its own as the pair has crashed down to fresh two-year-lows.

USD/CAD, on the other hand, may retain some workable scope. I had started lining up the pair for bullish reversals earlier this month. Price action built into a falling wedge formation with sellers appearing very reticent to test below the 1.3000 psychological level. That reversal began to play-out last week, and prices have pushed up to fresh monthly highs. I had looked at bullish continuation scenarios coming into this week, and prices put in a revisit to support yesterday, keeping the door open for a continuation of higher-highs and higher-lows, particularly if this FOMC rate decision tomorrow produces a net of USD-strength.

For traders that would like to set up fades of this recent USD-strength, USD/JPY can remain of interest. The pair came into this week grasping on to resistance and has so far held below the 109.00 level that marks the July high. Current support is showing around a Fibonacci level at 108.47, and a break-below here can open the door for a revisit to 108.00 or perhaps even 107.50.