US Dollar Gains After GDP Release

The US Dollar remains bid after this morning’s release of Q2 GDP numbers. While deceleration was expected to a degree, the slowdown wasn’t as bad as feared as growth came in at 2.1% for last quarter versus the expectation for 1.8%. This sets up a more difficult scenario for the FOMC to justify future rate cuts beyond next week, and in response, the US Dollar is gaining ground ahead of the highly-expected cut next Wednesday.

This sets an interesting stage: There’s 100% chance of getting at least one cut next Wednesday, and as of this morning, a 19.4% chance of getting a 50 basis point move. Going out to December of this year, however, brings in far more contention, as there is but a mere 11.2% chance that next week’s cut is a ‘one and done.’ There’s a 35.2% chance for one additional 25 basis point cut this year, and 36.7% probability of two additional cuts. With additional expectations for even more softening, this brings up the whopping 53.5% chance that the Fed will cut rates by at least 75 basis points before the end of this year.

The Fed, at this point, has merely opened the door for one cut this year, keeping a wide range of divergence between market and FOMC rate expectations. 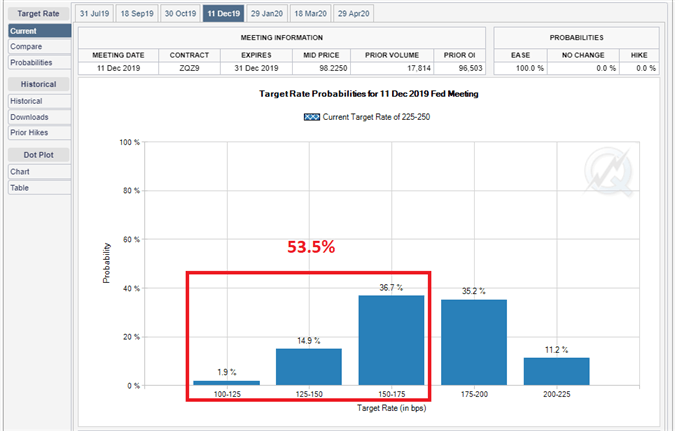 Next week presents a couple of interesting items. Not only is this expected to be the bank’s first rate cut since the Financial Collapse, but this is also the first rate move since Jerome Powell made every FOMC rate decision ‘live’ for 2019. Previously, the bank appeared reticent to make any rate moves at non-quarterly meetings in which updated projections would not be provided. But, coming into this year, each FOMC rate decision was made a ‘live’ meeting in which a press conference would take place thereafter, allowing for the bank to provide some clarification around each of these respective decisions.

That clarity, so far in 2019, does not appear to have helped matters as the divergence between market and FOMC rate expectations has only grown. So for next week, a 25 basis point cut appears to be fairly well baked into the matter: More pressing is what the FOMC might be looking to do after that cut.

As seen last week, this is a highly-pensive theme. An off-hand comment from NY Fed President John Williams sparked a very visible move of weakness in the US Dollar when markets inferred that to mean that the bank was looking to be more aggressive. That led to a swift breakout in Gold prices as risk assets elevated on the back of hopes for a more-dovish Fed.

US Dollar strength came screaming back this week as those prior comments from John Williams were walked-back by the New York Fed. I had discussed this matter last Friday in the article, US Dollar Goes Haywire on Fed-Speak Mis-Fire. Since then – the US Dollar has been in a hard rally mode as buyers have pushed the currency up to fresh seven-week-highs ahead of this highly-expected rate cut.

Taking a step back and the US Dollar is testing a difficult area on the chart. Just above current price action is a daunting level of resistance around 98.33, which twice rebuked the bullish advance in Q2 while building in a double-top formation. Yesterday saw a bit of wiggle in that theme around the European Central Bank rate decision when a quick dose of Euro strength showed on the back of a less-dovish ECB outlay than what was expected; but USD bulls came right back into the party after a quick check of higher-low support and prices have propelled into a confluent zone of Fibonacci resistance that runs from 97.86-97.94.

Mario Draghi’s tenure atop the ECB is winding down, but that hasn’t stopped markets from pricing-in the potential for aggressive action at the bank. Coming into this week, there were expectations for a possible ten basis point cut deeper into negative territory to go along with a peak at potential QE from the bank later in the year. Both of these items were mentioned in the ECB statement that dropped at 7:45 AM ET, and this brought in a quick dose of Euro-weakness; but when the press conference began at 8:30, another theme took hold altogether.

EUR/USD gained throughout that press conference as Mario Draghi said the bank didn’t even discuss the possibility of a cut yesterday. This helped prices in EUR/USD recover from a quick perch down to the 1.1100 handle all the way up to resistance taken from prior support.

EUR/USD Hourly Price Chart: ECB Vol, Back to Where We Started

This wasn’t the last that we heard out of the ECB yesterday, as an after-the-fact ‘source’ pointed out that policymakers were in agreement that a cut was coming in September. This finally helped to calm the single currency after that quick dose of strength but leaves the currency in an even more opaque backdrop given yesterday’s events.

The net result of yesterday’s price action was a doji between both support and resistance. This keeps that bear trap potential alive in the pair ahead of next week, particularly considering how long-in-the-tooth the bullish USD theme appears to be. I had discussed the potential for this bear trap scenario on Tuesday and as we move into next week’s FOMC rate decision – that scenario remains workable.