US Dollar Price Outlook: EUR/USD, USD/CAD Set Up for USD-Weakness

US Dollar Drops On Powell Testimony

This week’s economic calendar slows down a bit from the Central Bank heavy outlay from last week. A series of Fed speakers spoke on the topic of US monetary policy, with the predominant focus being paid to Chair Powell’s Humphrey Hawkins testimony on Wednesday and Thursday. The Chair took a noticeably dovish tone in the prepared remarks and ensuing testimony, and this helped to drive US equities up to fresh all-time-highs as the S&P 500 jumped above the psychological 3k level.

This presents an interesting scenario for the Fed’s rate decision later this month. Last week also brought the release of inflation data out of the US, and core inflation remains above the Fed’s target of 2%. This follows jobs data from the week prior that also showed with strength, indicating that neither inflation nor employment are in dire spots at the moment. But – the Fed chair was still dovish last week, and that begs the question as to whether he/they see something that isn’t yet visible in the data and, further, how much softness might the Fed bring to monetary policy in the coming months.

Markets are very much geared up for a rate cut out of the Fed at the meeting that concludes on July 31. There’s a 27.6% chance of 50 basis points of cuts at that meeting, with the remaining 72.4% probability looking for 25 basis points. Suffice it to say, if the bank doesn’t cut rates at all, there will likely be massive disappointment that could bring those equity trends into question. Thickening the drama, markets are going to have to wait until September for updated forecasts out of the bank, as the Summary of Economic projections released in June indicated the expectation for only 25 basis points of softening in the second-half of this year. 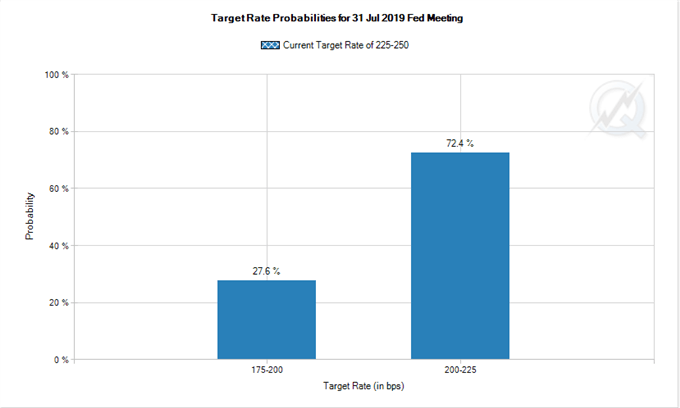 For its part, the US Dollar moved back into a bearish backdrop around last week’s Powell commentary. The month of June was a change-of-pace in the Greenback, as the strength from the prior nine months was flipped on its head. Prices in DXY broke below a rising wedge formation, which will often be approached with the aim of bearish reversals. That theme of USD-weakness hung around until the end of Q2, but as the door opened into July prices bounced, and prices rallied all the way into last week.

With sellers making a marked reappearance, can USD bears continue to push for the next couple of weeks as that rate decision nears? Underneath current price action are two nearby areas of support potential. At 96.47 is the 23.6% retracement of the 2011-2017 major move; and below that in the zone that runs from 95.86-96.03 is a confluent zone of Fibonacci levels that currently marks the three-month-lows in the currency after helping to arrest the June decline a few weeks ago.

The month of June was likely at least a little surprising around the Euro. While the currency remains mired by a series of bearish factors, June brought strength, particularly in EUR/USD as another newer theme took-over. This allowed for EUR/USD to jump up to fresh three-month-highs as longer-term short positions were squeezed; and if the theme of USD-weakness can stick around, there may be scope for more. I had looked into EUR/USD on Friday of last week as the pair was testing another zone of support; and that scenario remains workable into this week as prices have thus far held that level.

USDCAD Closes in on 1.3000 Psychological Level

Perhaps a bit cleaner from a fundamental perspective, USD/CAD could present short-side interest. When the Fed started to take a dovish tilt in the month of June, the Canadian economy printed red-hot inflation numbers showing at 2.4%. So, as the US Dollar was dropping, the Canadian Dollar was surging on the back of this better-than-expected data; and that helped the pair to stick to an aggressive short-side run that broke-below a symmetrical wedge formation.

The pair is starting the week with an aggressive push down to the 1.3000 psychological level that hasn’t yet been traded at in the year of 2019. Below that, additional support potential exists around the 1.2928 area on the chart, and for traders that would like to wait for a pullback, resistance could be sought out around prior support of 1.3065.