US Dollar Rejected at Weekly High After NFP: S&P 500 Nearing a Turn?

- The US Dollar is heading lower this morning following the release of April Non-Farm Payroll numbers out of the United States. The headline print came out strong, showing at +263k versus an expectation of +190k. But, elsewhere in the report, the internals weren’t as positive and the net response thus far has been a move of USD weakness.

- The initial move in USD was a quick wick up to test the weekly high; but sellers showed soon after and have retained control since. The rest of today brings a series of FOMC speakers, and this could continue to drive volatility through markets following this week’s rate decision, and next week brings the release of US CPI numbers on Friday.

US Dollar Drops After NFP

This morning brought the release of April Non-Farm Payroll numbers out of the US, and while the headline number was fairly strong, the internals were questionable. The US economy added +263k jobs in the month of April, blowing by the expectation for +190k to have been added. Also in the positive column was the unemployment rate, which sunk to a fresh 50-year low, printing at 3.6% versus the expectation of 3.8%. But – the question marks around inflation in the US economy remain as Average Hourly Earnings missed expectations, coming in at an annualized 3.2% versus the expectation for 3.3%; and labor force participation also slowed, helping to buffer that attractive showing in the unemployment rate.

At this point, the net response in the US Dollar has been one of weakness. After an initial flare of strength after the release of the headline number, at which point prices in DXY pushed-up to test the weekly high at 98.10, bears have come back to re-take control of the matter.

US Dollar 30-Minute Price Chart: Rejected at the Weekly High

The remainder of today will be filled with Fed-Speak: At 10:15 AM ET, we hear from Evans and that’s followed by Mr. Richard Clarida at 11:30 AM. John Williams of the NY Fed speaks at 1:45, and Bowman offers comments at 3:00 PM. Later tonight at 7:45 PM ET, after markets have closed, we will hear from all of Bullard, Daly, Kaplan and Loretta Mester.

Given this week’s response around FOMC, and that color commentary could offer some much needed clarity. Price action in the aftermath of this week’s Fed rate decision has been rather messy. There have been a few clear themes, such as USD-strength, but in major risk areas such as US equities, more questions remains.

In the US Dollar, the big question is whether bulls can continue to drive. The initial response around FOMC was a quick stop run through the weekly low, but that was followed by a pronounced bullish response that saw USD move right back towards prior highs. That theme lasted all the way into this morning’s NFP which, at this point, appears to be a mere pullback in that bullish trend.

US Equities: Is a Turn Nearing?

Perhaps the bigger question at the moment considering this week’s moves is whether or not US equities may be nearing a turn. Stocks put in a pronounced bearish response after the Wednesday Fed meeting, and that theme of weakness lasted through the open yesterday. From a technical perspective, the S&P 500 tested below a bullish trend-line that makes up the support side of a rising wedge pattern, and this is a formation that will often be approached with the aim of bearish reversals.

The fact that this move appeared to emanate from a Federal Reserve that didn’t come out as dovish as many had expected, and there could be considerable interest around reversal backdrops as we move deeper into Q2.

The risk trade folded in Q4, and the big driver there appeared to be some comments from FOMC Chair, Jerome Powell, alluding to a series of future rate hikes out of the Fed. This took place in the opening days of Q4, and shortly after stocks had started to turn-lower with a full head of steam. That theme lasted throughout the final quarter of last year, with lows coming in around the Christmas holiday. And Q1 of this year saw a considerably more passive FOMC that did away with rate hike expectations for this year; and quickly – stocks had reversed course and started to gain as if it was 2013 all over again.

This has produced a V-shaped recovery off of the lows, and prices in the S&P 500 are back to testing those prior all-time-highs, taken from around the 2940 area on the chart.

The big question is whether sellers come back to re-take control of the matter. While the FOMC didn’t exactly come out as hawkish, they were less dovish than what many market participants were expecting. Odds around future rate cuts have already narrowed: As looked at on Wednesday, there was a 65.5% probability of at least one rate cut by the end of this year. Now – those odds have slimmed down to 50.1%. 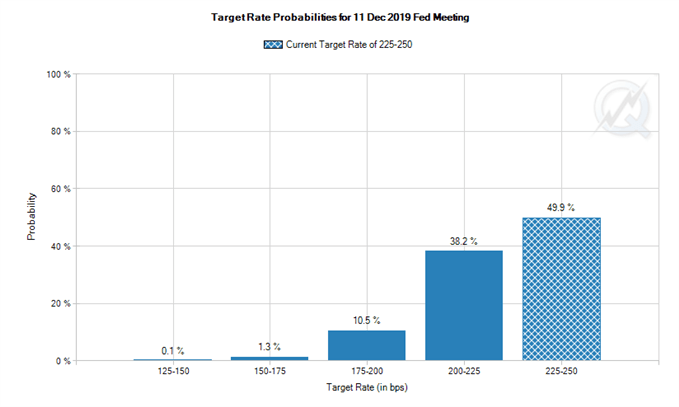 In the S&P 500, a combination of a bearish reversal pattern, a struggle at the prior all-time-highs, combined with a Federal Reserve that came out less dovish than expected, and the theme for US equity pullbacks can grow more attractive. At this point, the big question is what happens upon re-tests of those prior highs around the 2940 area: A show of resistance can re-open the door for bearish scenarios, looking for a downside break of the rising wedge pattern.