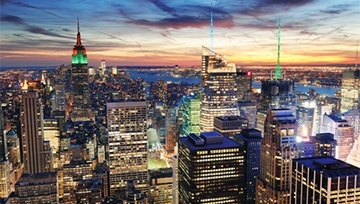 US Dollar Drops After Test of Yearly Highs: Next Week Key for Stocks

- Yesterday was a big day of USD bulls as the currency jumped up to test the 97.71 level that marks the 21-month highs in the currency. That level has so far held as resistance, but there’s a case to be made about the move being rather stretched by the time that level came into play. This can keep the door open for potential bullish trend strategies as a full slate of US data is on the docket for next week.

- US equities posed a noticeable turn this week after a very bullish first two months to the year. The big question at this point is which trend takes hold? Will the bearish themes from Q4 make a raging comeback to eviscerate 2019 gains? Or are buyers waiting on the sidelines with the expectation that more-passive, accommodative Central Banks are waiting in the wings to help support the bid and prevent a recurrence of what happened in Q4?

It’s been a busy week across global markets and traders may now have some new themes to work with as the end of Q1 nears. US equities turned-over this week, and the surging up-trends from January and February are now in question. The US Dollar saw a significant burst of strength yesterday, running up to the 97.71 level that marks the 18-month high in the currency at which point sellers began to show-up. EURUSD finally tested below the almost four-month-old range after yesterday’s ECB announcement, only to find support a little-lower before a bounce developed. And next week brings the Brexit vote in UK Parliament on Tuesday, going along with a series of US data prints that will keep focus around the world’s largest national economy. Below is the economic calendar with high-impact announcements on the docket for next week. 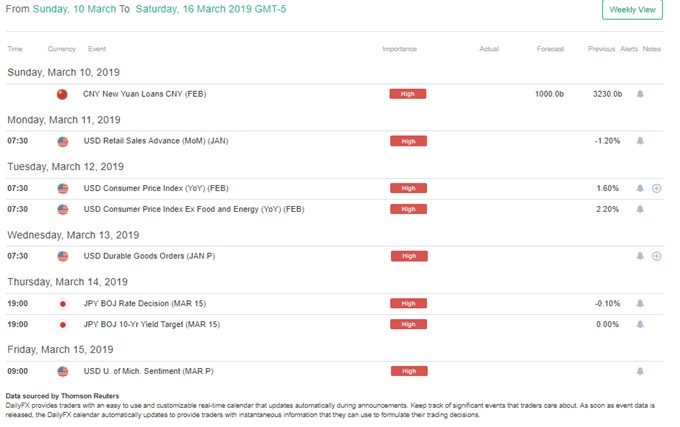 At the forefront of global markets for this week was the stall in bullish themes that have been showing in US equitie s. Bears made a big showing in Q4 of last year; but after the low was set around Christmas, buyers have very much remained in charge; until this week, that is.

But it was the manner with which buyers had priced-in that move that was suspicious, as the bullish response was far more clear around support/prior lows than it was around resistance or prior highs, which led into a rising wedge formation. Such formations will often be approached with the aim of bearish reversals, positing that the lack of enthusiasm from buyers at or around highs will, eventually, carry over into bearish themes.

That happened this week as sellers made their mark on Monday and continued to push throughout the week. At this stage, the big question is whether the final month of Q1 takes on the tone of the final quarter of last year, where prior bullish gains are erased in a rather quick, frenetic manner. In the Dow Jones Industrial Average, prices are testing through a key area of support right now, and if this doesn’t hold, the 25k level comes into full view. A break-below that would likely be construed as a very bearish signal, opening the door for deeper losses ahead.

US Dollar Drops After Failed Test of 2019 Highs

Yesterday was an especially bullish outing for the US currency as DXY surged up to test a key area on the chart. By the time prices got there, the move was fairly stretched, so it can be difficult to move-forward yet with the idea that the top is in place. The level at 97.71 on DXY had twice turned-around bullish advances in Q4. First in November, and then in December before bears took control of the matter, pushing prices down to the 95.00 handle a month later.

But the past week-and-change has seen bulls re-emerge, initially in response to the US GDP report last week; with the move furthering around this week’s ISM and then yesterday’s ECB rate decision.

The big question around the US Dollar for next week is whether buyers show-up to offer support around prior resistance, allowing for the potential build of a new trend after the currency has spent much of the past four months in a range-bound state. Below are a series of potential support levels for nearby price action in DXY/the US Dollar.

Linked to the above theme in the US Dollar is what’s been taking place in EURUSD. The pair saw an outsized bearish response yesterday as the ECB announced a fresh round of TLTRO’s. And while prior announcements of stimulus were generally construed in a ‘risk on’ fashion, yesterday’s announcement appeared to be taken as anything but that, with global stocks selling off in the aftermath.

In EURUSD, prices finally tested below the November low, threatening a break of the range that’s been in-place for almost four months. But, as shared in yesterday’s webinar, support showed up just a little-lower on the chart, taken from the 61.8% retracement of the 2017 bullish move in the pair. That has, so far, helped to hold the lows after yesterday’s announcement.

The big question around the pair for next week is, again, linked to the above scenario in the US Dollar. Given the size of yesterday’s move, its reasonable to imagine that prices might be taking a mere pause in the bigger-picture establishment of a fresh trend. But, the trader must also consider the longer-term setups and the fact that sellers in EURUSD and buyers in DXY have been thwarted around key areas on the chart.

As US equities were coming back to life in January and February, so were themes of Yen-weakness after the early-year surge of strength. I had followed this in EURJPY as this was my ‘Top Idea for 2019,’ looking for additional downside in the pair. On January 3rd, prices in EURJPY plummeted below the 119.00 level; but this was followed by almost two full months of retracement as the pair built-in a bear flag formation that was looked at last week.

Last Friday saw resistance come into play at 127.50, and since then bears have been getting back in-control, helping to push the pair below the key level of 125.00 and opening the door for further downside. This makes an interesting argument for strategies of Euro-weakness, Yen-strength or continued risk aversion.

In USDJPY, the 112.00 level has proven too strong to break, at least for now. Last week saw potential capitulation as buyers were rebuffed following a test above this key level on the chart. Since then, a pullback has come into play that’s pushed prices back-below the 111.00 handle. Prices are now finding a bit of support at a key Fibonacci level around 110.86; and this can present a polar opposite type of scenario as the above in EURJPY, in which traders looking for a resumption of the ‘risk on’ trade can look to bullish themes in USDJPY.