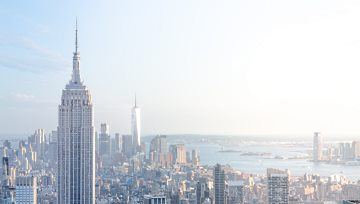 - The US Dollar has continued to hold resistance at monthly highs after another test in the overnight session. The week-long bullish run in the currency may be due for a deeper pullback given the short-term overbought nature of the move; and correspondingly, this has helped EURUSD and GBPUSD put in the initial build of support bases.

- Next week’s economic calendar brings US items on Wednesday and Friday, and an RBNZ rate decision is set for Tuesday afternoon (Wednesday morning in New Zealand). Also of interest is the Wednesday release of UK inflation figures following this week’s moves in Cable, with GBP/USD putting in a reversal around yesterday’s BoE press conference.

The US Dollar’s week-long bullish run has continued to find resistance at the monthly high around the 96.68 level on DXY. I had looked at this in yesterday’s webinar, honing in on the fact that buyers remained in-control for much of the prior week, driving from a higher-low up for that resistance test. A bit-higher on the chart is the 2019 high around the 97.00 level, and this could be a next item of interest for resistance. On the inside of price action, 96.47 remains of interest and a bit-lower, 96.30 and 96.04 could keep the door open for support themes in the currency.

Next week’s economic calendar brings a few items of note for the US Dollar. January CPI figures are released on Wednesday, and then on Friday Advance Retail Sales is followed by U of Mich Consumer Sentiment. Outside of the US, an RBNZ rate decision is set to take place on Tuesday, and UK inflation figures are released on Wednesday morning. Each of these will likely receive considerable focus from Kiwi and Cable traders, respectively.

DailyFX Economic Calendar: High-Impact Events for the Week of February 11, 2019 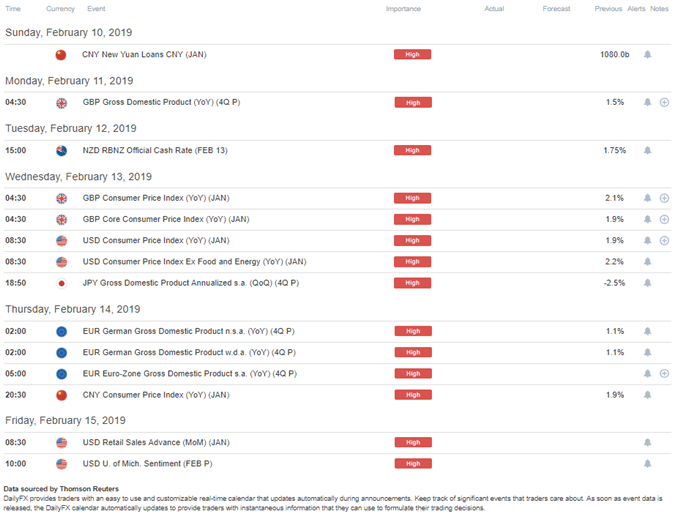 EUR/USD put in a resistance test on the final day of January, pushing above the top-end of the resistance zone that I’ve been following at 1.1500. But that was soon met by sellers, and as the door opened into February, bears began to make a greater push on the charts. That downward momentum remained in-effect for most of this week, with a bit of support showing around the 1.1325 level in yesterday’s trade. Bears were again thwarted at this level upon a re-test this morning, and already prices are pushing up for a test of the aggressively-sloped trend-line as taken from February 1st and 5th swing-highs.

GBP/USD Attempts to Build Support Base

It was a surprisingly bullish month of January for the British Pound. The currency came into last month spilling down to a fresh 20-month low, testing below the 1.2500 level. But shortly after that saw a far different theme as buyers pushed prices all the way up to the 1.3200 handle by the end of January. A bit of softening in that theme developed last week, and coming into this week, Cable was holding above the 1.3000 level, but that didn’t last for long.

Negative data earlier in the week brought a support break, and this hastened during the early portion of yesterday’s BoE rate decision when the bank cut growth forecasts while Mr. Carney warned that the ‘Fog of Brexit’ was a constraint to business conditions. But – he later said that clarity on Brexit could bring upside, and this brought upon a reversal in that bearish move and prices soon made a fast move towards that 1.3000 psychological level. A short-term pullback from that move saw buyers re-enter around the 1.2920 Fibonacci level, leading to the potential for a continuation of higher-lows in the pair.

A topside break through the 1.3000 level next week could soon re-open the door to bullish strategies in the pair. But as discussed throughout this week, traders would likely look to keep that strategy shorter-term in nature given the messy fundamental backdrop around the UK, and GBP as Brexit-day is now just seven weeks away.