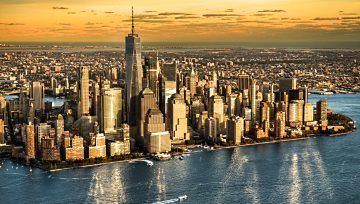 US Dollar Breaks Down as Fed-Speak Begins: EUR/USD to Two-Month Highs

- The US Dollar is working on fresh two-month lows after some comments this morning from FOMC Member, Rafael Bostic, and this opens a two-day period in which the focus will be on the Fed. A slew of Fed speakers are on the calendar for the next two days, highlighted by a speech at the Economic Club of Washington from FOMC Chair Jerome Powell at Noon ET Tomorrow. This could finally help the Dollar to set on a directional move should the Fed chair echo his Friday caution around future rate hikes.

- Recovery continues across risk markets such as the Yen and US equities, each of which saw risk-driven moves show up in December. In US equities, both the Dow and S&P 500 have crossed-above key levels on the chart denoting the potential for further recovery, while USD/JPY has continued to find support at prior resistance areas, indicating that a re-test of the zone around 110.00 may soon be in the cards.

It’s been a relatively tame past 24 hours given the dynamics that were seen just a week ago and a slew of Fed-speakers over the next couple of days may be able to re-invigorate matters. The Japanese Yen continues to recover following last Wednesday’s ‘melt up’ that saw the currency pose significant gains during the low-liquidity handoff from the US session into Asia. After that quick swell of Yen-strength, prices have spent much of the past week exhibiting varying forms of recovery. As discussed in yesterday’s webinar, those areas of prior resistance potential have continued to hold as support as prices have crawled higher on the chart: In USD/JPY, this amounts to a potential re-test of the zone around the 110.00 level for that next area of resistance.

Today brings a few items of note on the economic calendar, and tomorrow brings a speech from FOMC Chair, Jerome Powell. Markets will also hear from a series of Fed speakers over the next two days, kicked off by Rafael Bostic earlier this morning, and extending into Charles Evans today at 9AM, followed by Rosengren at 11:30 (all times in Eastern). Tomorrow will bring Tom Barkin at 8:30 followed by James Bullard at 12:30 and Jerome Powell at 12:45. Charles Evans will speak again at 1PM and FOMC Vice Chair, Richard Clarida will speak tomorrow at 7PM ET.

Chair Powell’s comments last Friday seemed to really invigorate the risk rally, helping with that recovery theme that’s been showing across US equities after a nasty reversal showed up around the Q4 open and lasted into the Christmas holiday. This week’s high-impact data concludes with the release of US CPI numbers for the month of December, set to be released on Friday morning at 8:30 AM ET. The expectation here is for headline CPI to moderate back-below the 2% threshold following last month’s print at 2.2%.

DailyFX Economic Calendar: High-Impact Items for the Remainder of This Week (Times in Eastern)

US Dollar Drops to Two-Month Lows After Bostic Comments

The US Dollar came into the week with continuation from the Friday sell-off that began to show after Chair Powell’s comments. Prices soon ran down for a re-test of the two-month lows, initially established in early-November and then re-tested shortly after the open of the New Year. But – sellers haven’t yet let up, a quick support bounce that showed on Monday after that level came back into play was stopped short, and bears are now pushing deeper after comments from FOMC Member Rafael Bostic indicated that he would be open to rate cuts if downside risks come to bear.

As discussed, yesterday, that support zone loooked as though it may not hold for much longer, Today’s release of FOMC minutes may be discounted to a degree given the focus on FOMC policy that’s shown since that rate decision, and this could put even more focus on Chair Powell’s speech tomorrow at the Economic Club of Washington, going along with the varying items of Fed-speak over the next couple of days. A continued dovish tone could allow for further downside in the US Dollar to go along with higher equity prices as that recovery takes another step away the December sell-off in risk assets.

Also showing a potential break of the consolidation theme is EUR/USD, with the pair testing above the resistance zone that’s been present for the past couple of months that runs from 1.1448-1.1500. As looked at in this week’s FX Setups, a topside break above the 1.1500-handle could re-open the door for bullish strategies in the pair as prices craft fresh two-month highs.

I had looked into the pair in yesterday’s webinar and how that topside break above 1.1500 might be handled in the event that it takes place within the next couple of days.

On that tune of recoveries , focus continues around US equity markets after the Q4 reversal. While Q3 was very bullish with a great deal of consistency, matters turned-around quickly as the door opened into Q4, and the timing of that theme syncs well with some comments from FOMC Chair, Jerome Powell. Powell had remarked that the bank was ‘a long way’ from the neutral rate on October the 3rd, and matters weren’t really the same for the rest of the year. Stocks reversed with aggression, and that theme largely lasted into late-November when Chair Powell’s tone had changed on the matter. When discussing the negative rate at another speech, the Fed Chair said that he felt the bank was ‘just under’ this level, implying that the Fed was getting less-hawkish and looking at fewer rate hikes for next year.

This came crumbling down around the December FOMC rate decision in which the bank forecast two rate hikes in 2019; perhaps not going as dovish as what markets wanted. And at this point, markets are pricing in zero rate hikes for this year, highlighting a degree of divergence between what the Fed was/is planning and what markets would like to see.

Since that December FOMC rate decision, there’s been a further softening in Powell’s remarks, running into last Friday when the head of the US Central Bank denoted that future rate hikes will likely not come-in as quickly as the bank had previously anticipated. This speaks to the ‘Powell Put,’ similar to the ‘Yellen Put’ or the ‘Bernanke Put,’ in which the stance at the Fed is somewhat governed by the performance of risk assets.

This has helped to buoy US equity markets following that aggressive reversal in Q4, and since then buyers have been pushing prices in US indices to higher-highs to go along with higher-lows. I had looked at bullish setups in both the Dow Jones and S&P 500 coming into this week; and the Dow continues to trend-higher on the chart, setting up for a showdown at the psychological 24k level after making a topside push above the 50% marker of the December sell-off at 23,847.