US Dollar Pulls Back from Yearly Highs Ahead of FOMC

- The US Dollar is in focus this final full week of 2018, as the Wednesday FOMC meeting is widely-expected to bring the fourth 25 basis point rate hike out of the bank in 2018. This hike has been long-expected, and the big question is how hawkish the FOMC might be as the page turns into 2019. The US Dollar tested a fresh yearly high on Friday but buyers were unable to continue the move: Prices started to pull back ahead of last week’s close and that’s continued into this week’s open.

- Last week saw the ECB announce and end to bond purchases via QE, and the Euro responded with a down-side test below the symmetrical triangle formation that had been building for the past month. But sellers shied away from a re-test of 1.1250, and since then prices have continued to trickle-higher on the charts. If the US Dollar does pose a deeper reversal around this week’s FOMC rate decision, EUR/USD could soon re-test the big zone of resistance that runs from 1.1448-1.1500; and for USD-weakness strategies, the short-side of USD/CHF could remain as attractive in the near-term.

US Dollar, US Equities in-Focus During Final Full Week of 2018

This is the final full week of 2018, as next week brings the Christmas holiday and the week after New Years. So, this is somewhat of a stretch run for global financial markets as a number of themes remain of interest, including an equity spill that showed up in Q4 that still has yet to go away. This leaves an item of anxiety for market participants ahead of the 2019 open, as US indices have given back the entirety of 2018 gains and currently sit below the yearly open. This could spell a red yearly print on both the Dow and the S&P 500, and with a hawkish Fed combined with a number of issues such as trade wars, Brexit and continued discord in Europe, that fear will likely remain into next year’s open.

This week will be critical for how year-end performance numbers look, as there are several items on the economic calendar that can provoke volatility. Monday and Tuesday are fairly light, but once Wednesday arrives, there will be Central Bank rate decisions out of the US, the UK, Japan and Mexico. On the data front, UK inflation is released on Wednesday morning, followed by Canadian inflation and Japanese inflation is released a day later. GDP data will be delivered by New Zealand (Wednesday afternoon) and Canada (Friday morning); and the week finishes with the release of US PCE, which is the Fed’s preferred inflation gauge. 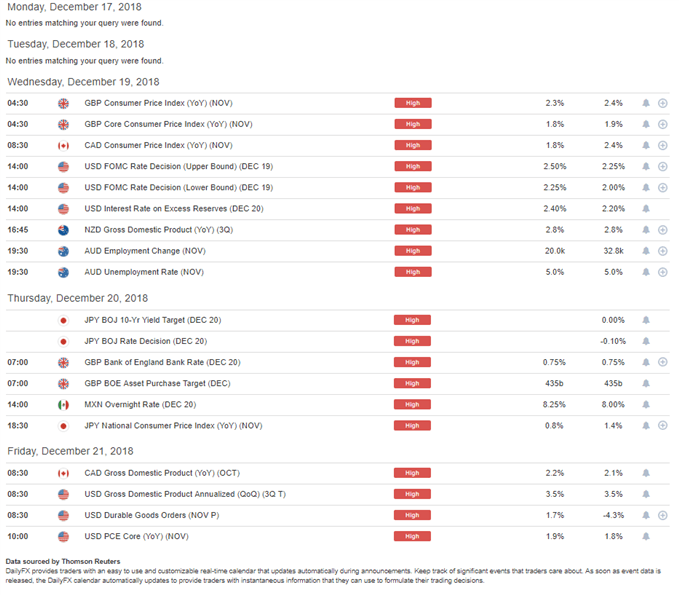 US Dollar Pulls Back After Test at Fresh Yearly Highs

The focus is on the US Dollar, particularly in the early portion of this week as the Wednesday FOMC rate decision is expected to bring a widely-anticipated rate hike. This would mark the fourth such move by the bank in 2018 as the Fed has continued in the hawkish stance that saw three rate hikes last year. A hike at Wednesday’s meeting has been long expected, so the big question is what the bank might be looking to do after that next 25 basis point move.

Coming into Q4, it looked as though the Fed had plans to continue with the ‘gradual’ rate hikes that have become commonplace over the past couple of years. But, just a couple of days into the fresh quarter, a comment perceived as very hawkish from FOMC Chair Jerome Powell kick-started a sell-off that continues to carry weight. Chair Powell opined that the neutral rate was ‘a long way off,’ inferred to mean the Fed planned to continue nudging rates higher into 2019. But seven weeks later, after equities had undergone a pullback that continued to show pressure, and Chair Powell remarked that the FOMC was ‘just under’ the neutral rate; which was inferred to be considerably less hawkish on the topic than he was just a month-and-a-half before.

How hawkish will the FOMC be on Wednesday? That’s likely going to be a driver behind both US equity prices and the US Dollar into year-end.

In the US Dollar, the currency tested a fresh yearly high on Friday but failed to pull new buyers into the mix, and this came after the week started in a rather bearish manner, with USD testing support at a key Fibonacci level around 96.47. Will US Dollar bulls be able to push going into FOMC? Key for that would be a hold of last week’s support that runs from 96.87-97.00. A bit lower is a bullish trend-line taken from the November 20th and last week’s low after the Sunday open; and below that is the 96.47 Fibonacci level that’s been in play twice already in the month of December.

EUR/USD Bounces Back After Bearish Test Below Symmetrical Triangle

Last week brought a notable item out of the European Central Bank as the ECB announced an end to bond purchases via QE. This was a well-telegraphed move but comes at an awkward time, as growth in the Euro-zone is sitting at four-year lows and the continent’s largest economy of Germany is already in a state of contraction. Perhaps more worrying is the implication of the political pressure that’s been seen of late, with the soothing of relations between Italy and the European Commission being replaced by worries in the Euro-zone’s second largest economy of France.

This backdrop may be one of the reasons that the currency failed to show any strength after the ECB announcement. Instead, EUR/USD tilted below the symmetrical wedge formation that had been building for the prior month, and tip-toed down to 1.1270. Since then, prices have bounced and that’s continued into the fresh week, leaving the pair in a rather trend-less state from a long-term perspective.

I listed this market in this week’s FX Setups of the Week, looking for a break of the bigger support zone lurking below. That support runs from 1.1187-1.1212, and if this is taken-out, the door could soon open for a bearish test of 1.1000. Until then, this is a market to be approached with caution as a deeper pullback in the US Dollar could finally elicit a break of 1.1500.

On the short-side of the US Dollar, I looked into USD/CHF as part of this week’s FX Setups, and the pair could remain interesting in the event of a deeper sell-off or pullback in USD around this week’s FOMC rate decision. USD/CHF spent the first-half of Q4 in a rather bullish state, tracking the Dollar’s topside breakout fairly well. But, around mid-November, prices began to top, and this started a pattern of lower-lows and highs that remains into today. There was a considerable build of resistance around the parity figure, with sellers finally taking-control and pushing prices down to fresh two-month lows set on Monday of last week. Another lower-high printed around last week’s close and this week’s open, and this keeps the door open for bearish setups in the pair.