US Dollar Tests Fresh Yearly Highs Ahead of December FOMC

- The US Dollar is testing fresh yearly highs to continue this week’s move of strength, and this follows an early-week support test at the key Fibonacci level of 96.47. The big question at this point is how long might bulls be able to push, as a major USD event sits on next week’s calendar with the December FOMC rate decision. A hike has long been expected at this meeting, and this would mark the bank’s fourth 25 basis point adjustment in 2018. But, of recent, that FOMC hawkishness has come into question, as a series of risks remain in the global economy that may become exacerbated by continued divergence between major Central Bank monetary policy.

- Next week is the final full week of 2018, as the week after brings the Christmas holiday and the week after that brings New Years as markets open the door into 2019. Next week’s economic calendar has a series of high-impact events that could bring volatility to markets, with specific focus on the UK and Japan, as inflation prints are released out of each economy to go along with Central Bank rate decisions out of the BoJ and BoE.

The US Dollar has caught a bid this morning to push up to fresh yearly highs, breaking through the recent congestion to briefly cross-above the 97.69 area that had helped to hold resistance in early-November. At this stage, USD bulls have shown no signs yet of letting up, and next week brings a FOMC rate decision in which the bank is looking to push the fourth rate hike of 2018.

Next Week’s Economic Calendar: The Final Full Week of 2018

Next week is the final full week of the year, as the following week brings the Christmas holiday and the week after brings New Year’s. This will generally bring along low-liquidity conditions, and that can amplify the potential moves around some of these very key themes, such as FOMC rate policy, Trade Wars or Brexit.

The highlight of next week’s economic calendar is the FOMC rate decision on Wednesday. A rate hike here has long been expected for the Fed’s fourth move of the year; but the bigger question will be how aggressive the bank is looking to mold policy in 2019. So, as has become the norm, the focus will likely be on the bank’s forward-looking projections rather than the rate decision itself. There are also Central Bank rate decisions out of Japan on Wednesday night and the UK on Thursday morning. 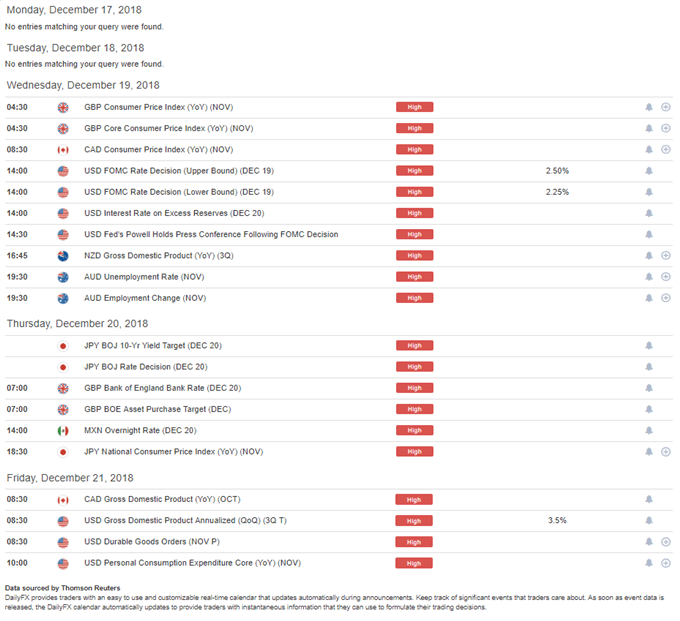 EUR/USD has been fairly tame over the past month, all factors considered. While trends have been showing in fits and starts throughout the year on the pair, the past month-and-a-half of price action has brought upon consolidation as EUR/USD has traded deeper within a symmetrical triangle, and that triangle takes place between both key support and resistance.

This morning’s rush of USD strength has seen the support side of that formation tested following the earlier-week failed test through resistance.

Taking a step back on the pair, traders would be justified in taking a cautious approach towards this triangle test, as support underneath current price action could thwart attempted breakouts ahead of this FOMC rate decision. On the underside of price action, the yearly low in EUR/USD sits just above a key Fibonacci level at 1.1212; and just below that is another level of interest at 1.1187, as this is the 61.8% retracement of the 2017-2018 up-trend in the pair. A break-below this zone could make the prospect of bearish trends look considerably more attractive, looking for a push down to the 1.1000 psychological level.

On the other side of the pair, resistance remains in the zone from 1.1448-1.1500; and this is an area that’s had a role in the pair’s price action throughout Q4, showing as support in early-October and soon becoming resistance for the next two months. A topside break above this area would indicate greater recovery potential.

GBP/USD: Cable Pushes Down Towards 1.2500 as Key Resistance Holds

It’s been a wild week around the British Pound, as the currency opened by plunging down to fresh yearly lows as Theresa May called off this week’s Brexit vote in UK Parliament. This was followed by a show of no-confidence from the PM’s own party, a vote that she passed on Wednesday; and this leaves matters practically in the same spot as they were last week. Theresa May has the unenviable task of getting a Brexit plan pushed through both Europe and UK Parliament. This doesn’t seem like a highly-probable type of arrangement, and in response the British Pound has displayed bouts of weakness as this additional uncertainty has been incorporated into the manner.

In GBP/USD, the pair put in a very strong push from the early-week support test at 1.2500; but the pair ran into a key area of resistance that bulls were unable to break through. This takes place at the 1.2671 level, which is the 23.6% Fibonacci retracement of the ‘Brexit move’ in the pair, and this is the same level that helped to set the yearly low for the past three months until the Monday breakout showed-up.

This matter will likely stay in-focus next week as economics push into the headlines in the UK, as Wednesday brings a release of November inflation data and this is followed by a BoE rate decision on Thursday morning.

The fourth quarter of this year has been a peculiar period for AUD/USD. The pair spent most of the first nine months of this year in some form of down-trend, holding below a key bearish trend-line on the chart. But the lows began to slow in October as sellers got shy around the .7000 big figure, and as soon as the door opened to November, the pair broke out to fresh highs and continued to carry a bullish lean for most of the month.

But the December open has brought an element of change to the matter, as a rather visible drop last week brought in a key area of support, and that support bounce built into a bear flag formation as discussed in yesterday’s webinar. That bear flag is now in the process of unfolding, and sellers have pushed down to fresh six-week-lows. This can re-open the door to bearish strategies in AUD/USD, particularly for those that are looking for ways of trading USD-strength while still avoiding some of the fundamental issues surrounding the Euro or British Pound.