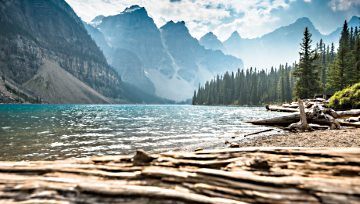 EUR/USD Folds at 1.1400 as USD/CAD Makes Another Run at Resistance

EUR/USD Folds at 1.1400 as USD/CAD Makes Another Run at Resistance

A bit of calm has shown over the US Dollar following the Wednesday fall, and this takes place as G20 is set to begin in Argentina. A number of issues remain of interest, and prices in DXY have continued to hold trend-line support following the earlier-week breakdown of US Dollar strength.

On a bigger-picture basis, the operative question is whether the two-month trend is at risk following Jerome Powell’s comments earlier this week. A bearish response showed in the USD as Chair Powell had a softer tone towards the Fed’s proximity to the neutral rate; and this helped DXY to put in a lower-high at the 97.50 level following the early-November high at 97.70.

Below the trend channel are several interesting items for support potential. The price of 96.47 is the 23.6% Fibonacci retracement of the 2011-2017 major move. This helped to cauterize support in the latter-portion of last week, and a bit lower is another Fibonacci level at 96.04, as this is the 50% marker of the 2017-2018 bearish move. This is also the same price that helped to turn around a bearish two weeks ago, bringing bulls back into the market after price action retraced from that fresh yearly high. And just below that, helping to establish a zone of support potential, is another level of interest at 95.86. This is the 50% marker of the major move that spans from the years 2001-2008.

This was a focus chart in yesterday’s webinar, as the short-term bullish move in the pair following Powell’s comments on Wednesday was unable to continue beyond the 1.1400 level. This was fairly clear evidence of sellers using that bump to add or establish bearish exposure. The big question now is how motivated sellers might be after lower-high resistance showed up; and given the higher-low that came into play ahead of that Powell speech, this may be a difficult time to try to work short-side trend strategies on the pair.

As the December open nears, the resistance zone that’s been in play over the past month remains of interest. This area on the chart runs from 1.1448 up to 1.1500, and this zone has had a bearing on price action for pretty much the entirety of Q4 so far, first as support and for the past six weeks helping to set resistance.

While GBP/USD was screaming with short-term volatility earlier this month, matters have calmed and prices appear to be digging into support offered via a trend-line projection. This trend-line can be found by connecting the October 2016 ‘flash crash’ low to the March 2017 swing low. For the past two weeks, this projection, shown in green on the below chart, has helped to set higher-lows in the pair.

This is around a key zone of longer-term support; and just underneath current price action there is additional support potential. The yearly low came-in from the 23.6% Fibonacci retracement of the Brexit move. And since that came into play in mid-August, prices have been building into a series of higher-lows. This is partly why I had called this setup a bear trap earlier in the week; and there may be some of that potential remaining as bears shy away from re-tests of prior lows.

What could make this setup interesting for trends again is a break of the three-month pattern of back-and-forth price action. On the support side of the matter, prices may need some help from the headlines with more negative Brexit items; and given the pace of the past few months, that’s something that the trader would have to look at as a possibility.

USD/CAD Poised for Another Test at the Yearly High: Can Bulls Break Through?

Going along with that bullish trend in the US Dollar over the past two months has been a strong and consistent topside move in USD/CAD.

I started looking at the pair for bullish setups a couple of weeks ago as a confluent area of support came into play, and prices soon worked up to fresh five-month highs. That enthusiasm continued into this week as price action vaulted up to a key area of confluent chart resistance, as taken from two Fibonacci levels resting at 1.3361 and 1.3377. This is the same zone of prices that helped to set the yearly high on the pair in June; just before the pair double-topped and reversed by more than 500 pips over the following four months.

But early-October is when the pair tested the 1.2800 handle; and since then buyers have been in-charge.

Earlier this week brought a trend-line test into the mix, and this was followed shortly after by a run up to 1.3361. After that resistance came into play, prices pulled back to set-higher low support, and it appears as though another test may soon be in the cards.

This can be a dangerous area to establish fresh bullish exposure, particularly given that this is a Friday with G20 going over the weekend. Traders may want to wait to see if another pullback shows up; and if buyers are able to punch through 1.3400 in short-order, the setup can be re-assessed to look for further potential around bullish continuation.